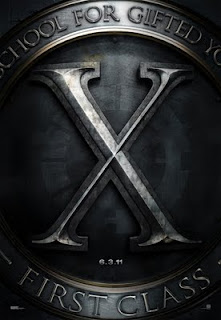 Somewhere between the pandering X-Men: The Last Stand and the effective X2: X-Men United lies the frustratingly coy X-Men: First Class, a prequel that explains how mutants went to bat for their less-evolved human counterparts and were pilloried, distrusted, and discriminated against. Lather rinse repeat.

Ah, but First Class is also a film about one of the comics' most definitive schisms, a story of the burgeoning rivalry between Professor Charles Xavier (James McAvoy), he of the optimism about humanity's genetic future, and Erik Lensherr (Michael Fassbender), a.k.a. Magneto, a Holocaust survivor with salient feelings about human intolerance. Given that First Class takes place in 1962 in a nation where one's skin color could negate their fundamental rights, Fassbender would seem to have a perfectly legit point. McAvoy tries to explain to him that angry, vengeful, and magnetic is no way to go through life. But in a credit to Fassbender's striking performance as the angsty future supervillain, it's difficult to completely blame him for his shortcomings.

The film itself gets no such pass. After using a considerable chunk of time to establish McAvoy and Fassbender as reluctant allies, the development of McAvoy's kiddie korps of mutants feels rushed. There's a romance of plot convenience between YA versions of Beast (Nicolas Hoult) and Mystique (Jennifer Lawrence, reclaiming the va-va-voom she ironed out for her breakout role in Winter's Bone) that resembles something like an arc. Aside from an elegant training montage, the x-kids are too busy running scared to develop any chemistry.

First Class wants to carry itself with an adult gravitas but is saddled with a teenage brain. For one, the number of mildly distracting cameos thrown at the audience is staggering. Matthew Vaughn seems to have raided the repertories of his favorite cult filmmakers, as there's no part too small that he can't fill with a James Remar, or a Ray Wise, or a Michael Ironside. Another warning sign: the movie is set during the Cuban Missile Crisis but emblazons its huge war room maps with the word 'RUSSIA' in bold typeface. In other words, if you can recall the Soviet Union, you are probably not the film's target audience. First Class is not the first brainless blockbuster with legitimate grown-up aspirations, but it's a pity that it won't commit to a single course of action. It doesn't embrace the sharp allegory of the Bryan Singer X-Men films, but it won't give the kids a chance either.
Posted by Eric Ambler at 1:43 PM