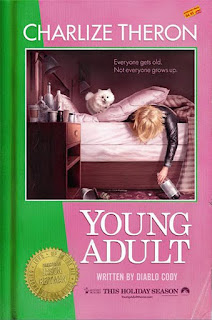 Young Adult (2011)
Dir. Jason Reitman
3 out of 5
Charlize Theron gives a jolting performance in the pitch-black comedy Young Adult as a profoundly unhappy ghostwriter for a popular book series revolving around the romantic entanglements of precociously glib high schoolers. She's good at her job, the movie suggests, because the self-absorbed characters she creates aren't too far removed from the capricious prom queen she once was - and still is, inside her mind. When an old flame (Patrick Wilson) from Theron's small Minnesota hometown sends her a picture of his newborn child, it throws her life of arrested adolescence into stark relief. Not that this is particularly discouraging to Theron. Instead, it convinces her that she can and must relive her high school glory days by prying Wilson away from his grown-up existence as a devoted husband and father.
That mordant plot capsule is about the only thing Young Adult has in common with anything else by writer Diablo Cody or, come to think of it, any other film by director Jason Reitman. This is their Big Bummer movie, full of writerly miserabilia and moral confusion that second-guesses misplaced nostalgia and our ruthless cultural preference for youth. That this is done with minimal ironic detachment is all the more impressive. Cody's usual linguistic acrobatics disappear when she has to put her words in the mouths of adults, aside from the too-cute device of having Theron translate her gradual meltdown into fodder for the final installment of her soapy teen novel series. For a duo that did their darndest to make teen pregnancy seem kind of cool in Juno (a few years before MTV did the same) it's quite the daring turnaround.
It's hard for me to describe, then, why Young Adult doesn't feel as affecting as it should. Part of it has to do with events near the end that strain credulity and clash with the movie's otherwise nonjudgmental tone. However, it would be difficult to completely spoil the patiently-crafted relationship between Theron and fellow slacker Patton Oswalt (it should be said that nobody does schlubby misery as well as Oswalt). They are both pretty interesting people, as it turns out, and possess talents that are overshadowed by their all-encompassing bitterness. Despite their fantastic performances, that sour taste never really goes away. It makes for an refreshingly acerbic film but comes at the expense of dulling the rest of the senses.
Posted by Eric Ambler at 6:15 PM