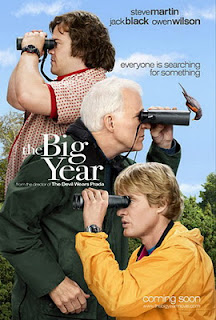 As the kind of movie made for people complain that Hollywood used to make good movies, gosh darn it, the kind the whole family could enjoy, The Big Year takes no chances in establishing its aura of genial harmlessness. Doughy man-child Jack Black stars as an avid birdwatcher (or “birder” in official parlance) living with his parents when he decides to tackle the “big year” – an annual competition to spot the most species of birds in North America within a calendar year. To win, he must outmaneuver the current record holder, a paisley fedora-wearing asshole played by Owen Wilson, as well as retired businessman and friendly rival Steve Martin. This triumvirate of mellowness is complemented by the competition’s relatively low stakes, which are not much more than the respect of other birders and the thrill of seeing one’s name in print (curiously, the latter is the same honor that once made Martin’s simpleton character in The Jerk beside himself with glee).

Films like this must necessarily exaggerate the popularity and importance of a particular subculture, but this one is almost constantly on the defensive. Family members, co-workers, and the media pick on the birders like schoolyard bullies; the movie returns the favor with ill-conceived comedy punishing the uninitiated for their pitiful lack of ornithological knowledge. At least the film has a spry momentum that keeps the less-than-scintillating narrative in motion, as the characters travel to a variety of verdant and rustic locales from the topical climes of the Gulf Coast to the westernmost outpost of the Aleutian Islands. This nature-oriented footage has a breathtaking scope, successfully showing the appeal of birding for a few brief moments before returning the focus to the half-baked human drama.

There’s a problem when a narrative feature seems like it would be more appealing as a nature documentary. The film unwittingly presents a disconnect between its assertion of the big year as an ennobling, life-altering experience and the reality of its grueling routine of constant travel, dreary motels, and plaintive phone calls to lonely spouses/parents/paramours. It may build character, but that doesn’t seem worth the issues it creates in the main trio’s personal lives. Not that this matters so much. When all is said and done, most people will likely remember the pretty birds and forget the formulaic script. That’s about the worst thing that can be said about The Big Year – a movie as scenic as a picture postcard and only slightly more memorable.

Email ThisBlogThis!Share to TwitterShare to FacebookShare to Pinterest
Labels: reviews, The Big Year