Full reviews aren't right for all films - movies that seem past the point of timely comment, movies I can't find an interesting angle on, or movies I just don't feel like explicating. Some films are better off with bite-size opinionating. Let's call them "Jump Cuts." In this edition: three flights of fancy from the Reagan Era. 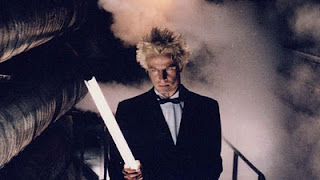 A lonely thief (Christopher Lambert) tries to romance a gangster's trophy wife (Isabelle Adjani) while hiding out in the tunnels of the Paris Metro in Subway, but the love story quickly becomes a sideshow when Lambert starts to ingratiate himself with the other bizarre denizens of the underground. His quirky odyssey takes him from alienated thug to unlikely concert promoter as he slowly assembles a band of fellow outcasts to play a climactic show for an audience of commuters and gutter punks. Unfortunately for director Luc Besson, the anarchic margins of Subway contain much more interesting material than his moody portrait of young star-crossed lovers. The film gets by with more than a little help from Lambert's friends (post-credit scenes and character introductions don't get much doper than this). That doesn't stop Besson from beating the drum for a relationship that never feels terribly convincing, seemingly overestimating the audience's desire to tolerate Lambert and Adjani's endless brooding. 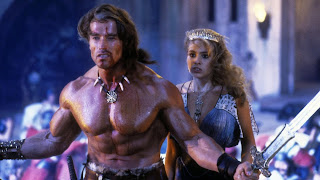 Conan the Destroyer (1984)
Dir. Richard Fleischer
3 out of 5
A prime example of the narrative bloat imposed on Hollywood sequels, Conan the Destroyer gives Arnold Schwarzenegger's titular barbarian an unwieldy cohort of comrades - itself a lesson in stunt casting gone awry with the presence of Grace Jones and Wilt Chamberlain - as he pursues a magical jeweled horn prized by a deceptive queen (Sarah Douglas) willing to sacrifice her teenage daughter (Olivia d'Abo) to resurrect a vengeful god. The film attempts to broaden its audience by toning down the brutal violence of the first installment and replacing it with awkward comedy and creepy sexual innuendo - a subplot where the virginal d'Abo attempts to put the moves on an oblivious Schwarzenegger should've been left on the cutting room floor. Nonetheless, plenty of Destroyer is still given over to Conan doing awesome Conan things, resulting in a rating best described as a "hard" PG. It's a film with just enough chutzpah to work despite its many shortcomings and with exotic visuals lustily shot by the legendary Jack Cardiff, there's still a little sorcery in Conan yet. 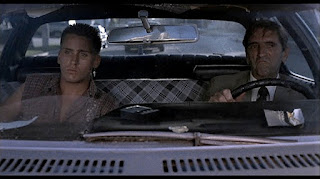 With a frank and freaking hilarious script bearing all the marks of a cult classic, Alex Cox's Repo Man stars Emilio Estevez as a down-on-his-luck punk in Los Angeles who finds his niche in the repossession business. The film perfectly captures the gritty, grimy milieu of a stultifying metropolis (all the consumer products have generic labels like "Beer" and "Food - Meat Flavored") even as the story morphs into a sci-fi mystery involving a 1964 Chevy Malibu transporting a dangerous group of extraterrestrials. Nearly every ingredient Cox tosses into his strange brew enhances the formula, especially the livewire relationship between Estevez and his mentor in legalized theft, Harry Dean Stanton, a perpetually on-edge repo man with the rumpled suit of a used car salesman and a personal code that forbids damage to any vehicle but doesn't rule out speedballs. Repo Man doesn't soft-peddle any of its quirks, yet avoids feeling too insufferable thanks to Estevez's earnest performance and an unexpectedly operatic climax assuring us that anyone can eventually find their place in the big, bad, weird world - even if home sometimes feels like it's light years away.
Posted by Eric Ambler at 9:30 PM