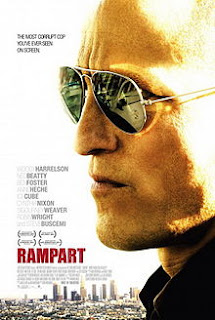 Rampart (2011)
Dir. Oren Moverman
3 out of 5
Woody Harrelson's unrepentant LAPD officer in Rampart is one of the nastiest cinematic cops in recent memory, a performance made all the more chilling in the film's historical context. It's set shortly after the 1999 Rampart scandal involving evidence tampering, drug dealing, and general corruption within the LAPD's anti-gang unit (one of their credos was "Intimidate those who intimidate others"). That Harrelson is still on the take in this politically-charged atmosphere, brutalizing criminals and family members alike, speaks to his status as a thoroughly horrible human being. His motive is pure sadism. He is cruel for the sake of being cruel, carrying out his duties with the ominous aura of an executioner. But when Harrelson's professional and personal mistakes start piling up, he is intimately acquainted with a painful truth that most law-breakers eventually realize: it's not a problem until you get caught.

An excellent, sprawling cast represents the many forces arrayed against Harrelson, trying their best to push back against his abuse of authority. They include Anne Heche and Cynthia Nixon as sisters who consecutively married (and divorced) him, Ice Cube as an equally aggressive counterpart in Internal Affairs, bratty daughter extraordinaire Brie Larson, and even the corrupt ex-policeman Ned Beatty, who mentors Harrelson with a combination of pride and remorse. (Notably, Harrelson's direct superior is not among this group.) It's a shame that their characters are altogether unequipped to parry his misplaced rage and unlimited capacity for lawyer-speak. Pitting Harrelson and his rhetorical fireworks against people who counter with lines like "You were dirty, and you dirtied us all up," seems highly unfair.

Director Oren Moverman tries to fashion a realistically sleazy tale of a shady sub-bureaucracy, but Rampart feels bloated with empty provocation. Harrelson's predatory relationship with lawyer Robin Wright and his brief visit to an underground sex club come to mind, the latter sequence being a egregious and annoying example of a filmmaker congratulating himself for foisting "edgy" material on a hopelessly naive audience. Rampart has too many "dirty cop" clichés embedded in its DNA to register as truly shocking, and at times resembles a cheesy TV drama - an act of violence meant to echo the Rodney King beating is presented in a groaningly obvious fashion (the movie as a whole is riddled with tiny anachronisms). Harrelson's ferocious and unglamorous turn keeps the movie afloat, however, pasting together a series of lurid vignettes into a greater story of a man's slow, inevitable slide towards obsolescence. Through his presence in every scene, we at least get a glimpse at the pathology of corruption, even if the rest of the film is ripped a bit too directly from the headlines.
Posted by Eric Ambler at 11:00 PM