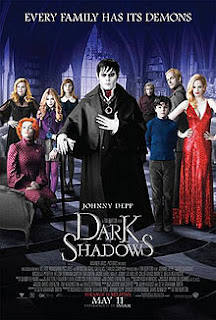 Dark Shadows is the eighth collaboration between Tim Burton and Johnny Depp, a partnership that endures thanks to Depp’s ability to immerse himself in Burton’s increasingly facile brand of make-believe without losing his pathos underneath all the pancake makeup and wild hairpieces. Burton’s more recent efforts have been criticized for lacking the depth of his earlier movies, but without the skill of a star like Depp (who has now starred in the director’s last four films) they’d be even harder to justify as something other than pretenses for weird, gothic dress-up. And while Dark Shadows is by no means an unwatchable film, it’s immensely telling of how the creative heat has transferred from director to star over the course of the past 20 years.

Based on the supernatural daytime serial of the late 1960s, the film concerns the lovesick vampire Barnabas Collins (Depp) and his attempts to resurrect his aristocratic family’s fishing business in the Maine hamlet where he first arrived as a boy in the 18th century. His task is complicated by the fact that he’s been taking a dirt nap for almost two centuries, entombed by angry villagers after he was saddled with the curse of vampirism by former lover and vengeful witch Angelique Bouchard (Eva Green). While Barnabas struggles to adapt to the late-20th century and its twin plagues of hippies and McDonald’s, Angelique has used the intervening years to build her own seafood empire that makes the barely hanging-on Collins concern feel like a fading memory.

The swinging ‘70s are a boon to Barnabas’ libido, however, and it’s here where Dark Shadows surrenders to dull melodrama despite the best efforts of its committed cast. Even after murdering his parents and his betrothed, Angelique still has her sights set on Barnabas’ heart, and their impassioned romp destroys the witch’s ultramodern boardroom in one of the movie’s giddiest sequences. But the film is unfortunately hamstrung by the chemistry-free pairing of Barnabas and Victoria Winters (Bella Heathcote), a stoic woman who’s the spitting image of his long-lost fiancé. Seth Grahame-Smith’s disjointed script also squanders the talents of Michelle Pfeiffer, Jonny Lee Miller, and Chloë Grace Moretz as the extended Collins clan, stranding them in subplots with no momentum and undermining what little development they achieve with a contrived ending full of empty twists. Credit Depp’s performance for giving Dark Shadows a friskiness that many of Burton’s recent projects have lacked, but it’s just not enough to breathe new life into the movie’s moribund soap opera shenanigans.