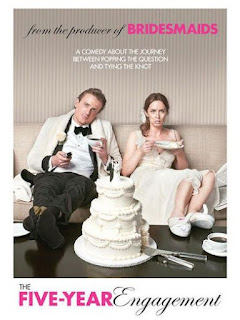 The perfect is the enemy of the good in the relationship of Tom Solomon (Jason Segel) and Violet Barnes (Emily Blunt), the well-matched couple of The Five-Year Engagement. Tom has a blossoming career as a San Francisco sous chef and, within the film’s first five minutes, the ideal fiancé in Violet, a psychology postdoc banking on an offer from Berkeley. Their wedding plans are delayed when Violet is instead accepted into the University of Michigan, which precipitates a move to the Midwest and a thorough emotional inventory that causes the couple to doubt if they are truly prepared to take the plunge. The relaxed chemistry of the film’s two stars enhances its typical rom-com hijinks, even as it takes a more conventional approach to the material than Nicholas Stoller’s first collaboration with Segel, the hilariously angsty Forgetting Sarah Marshall.

Like many Judd Apatow-produced movies before it, The Five-Year Engagement benefits from a stable of comedic ringers that adds variety to the consistently funny script. The supporting cast runs the gamut from stand-up comics (Brian Posehn, Kevin Hart) to sitcom scene-stealers (Mindy Kaling, Chris Parnell) to droll screen veterans (Rhys Ifans), and they riff off one another with ticklish glee. Then there’s Chris Pratt and Alison Brie, who put their own lusty spin on supportive “best friend” stereotypes as a mismatched duo that falls into bed together and, several smash cuts later, stumbles into the lifestyle that Tom and Violet are trying so hard to obtain. Their performances embody how hard the movie works to avoid the obvious. Stoller constantly squeezes humor out of situations that most romantic comedies would consider sacrosanct – when it’s time for Brie and Blunt to have a serious heart-to-heart about the direction of their lives, they impersonate Sesame Street characters to disguise their tone from Brie’s children. (Who knew that Elmo’s voice could make advice sound more sensible?)

Being the fruit of the Apatow comedy tree means that Engagement comes with built-in criticisms about its lengthiness and meandering pace. Several early scenes drag on uncomfortably long, and an entire act where Tom embraces his weird inner woodsman after an initial fish out of water period goes for incongruously broad laughs. But most of the extra time is well spent logically and colorfully fleshing out Tom and Violet’s evolving feelings toward marriage. It’s quite refreshing how film doesn’t pull punches in depicting the problems even the most compatible couples will have on their way to the altar. Sure, The Five-Year Engagement wanders a little too much on its way to comedic nirvana, but that’s tough to hold against a film about two people slowly realizing that a bit of growing apart is an unavoidable – and ultimately necessary – part of growing together.

Email ThisBlogThis!Share to TwitterShare to FacebookShare to Pinterest
Labels: reviews, The Five-Year Engagement