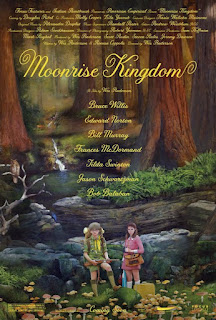 Wes Anderson’s fascination with child psychology isn’t exactly a secret – see the various parental hang-ups on display in The Royal Tenenbaums and The Darjeeling Limited – but he’s never tackled the subject as boldly as he does in Moonrise Kingdom, a charmingly arch tale of preteen lovers who cause panic in their New England island community when they run away together in the summer of ‘65. The die is cast a year earlier, when Sam Shakusky (Jared Gilman) bumps into Suzy Bishop (Kara Hayward) backstage at a church pageant, and the two begin a relationship via a series of letters that progress from banal pen pal banter into a frank discussion of their unhappy home lives. Sam is an orphan who spends his summers on New Penzance Island, where he is the least popular member of an orienteering group called the Khaki Scouts. Suzy is a hot-tempered schoolgirl alienated by her emotionally distant parents (Bill Murray, Frances McDormand), two lawyers in a crumbling marriage who have no idea how to handle their “troubled child.” Their flight, as narrator Bob Balaban helpfully informs us, coincides with the landfall of a historically destructive Nor’easter, adding urgency to the search and rescue effort led by the island’s philandering sheriff (Bruce Willis) and Sam’s middle-manager of a scoutmaster (Edward Norton).


New Penzance is a parochial place, so while Sam and Suzy’s elopement is more like an unauthorized camping trip, it's quickly blown up into a dangerous expression of forbidden love. It’s a premise well suited to Anderson’s brand of highfalutin goofery. He and co-writer Roman Coppola (who also helped script Darjeeling) essentially turn the film's first half into a parody of chase movies, filtered through the director’s typically mannered characterizations. Anderson is especially sympathetic towards Sam and Suzy. Deep down they’re sensitive kids with creative means of escape: for her, fantasy novels that Sam quickly deduces are way overdue from the library and for him, oil painting (“Mostly landscapes, but a few nudes”) and wilderness survival play-acting. Sam’s rigid application of his Khaki Scout knowledge is his antidote for an increasingly confusing world. But as the movie frequently suggests, the kids might be alright after all. Even when the pair is caught as in flagrante as their poorly developed knowledge of sex allows, the scoutmaster takes the time to commend his wayward recruit on his exemplary campsite. In fact, Gilman and Hayward are so assured in their on-screen debuts that the adult characters seem one-dimensional by comparison.

Moonrise Kingdom indulges its youthful vigor at all costs. It's Anderson’s broadest and most slapstick-y live action film to date, with hokey special effects that wouldn’t be out of place in a Harold and Kumar movie. Still, that doesn’t mean this Kingdom lacks sophistication. Each member of the film’s ensemble – which features boisterous cameos from Tilda Swinton as an imperious civil servant and Jason Schwartzman as a petulant junior scoutmaster – delivers each line in a perfect deadpan. Each set is thoughtfully conceived. Each prop is meticulously arranged within the frame. Even Alexandre Desplat’s witty score is masterfully explicated in one of the best end credits Easter eggs in years. Moonrise Kingdom won’t convert those who already consider Anderson too clever by half, but the story should resonate with anyone who’s experienced the agony and ecstasy of young love. These characters deserve to spend as much time as possible in Anderson’s obsessively constructed and controlled playground – heaven knows things will only get messier from here.
Posted by Eric Ambler at 7:30 PM