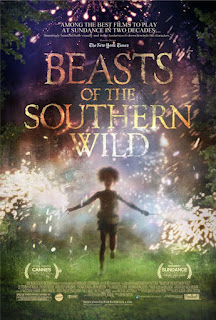 A bayou fever dream unmistakably inspired by the events surrounding Hurricane Katrina, Beasts of the Southern Wild presents an enthralling mixture of historical record and folklore to tell its emotionally charged story of pain, loss, and renewal. In many ways, it’s a stunning visual representation of the oral tradition. The plot concerns Hushpuppy (Quvenzhané Wallis), a precocious 6-year-old girl living with her tempestuous father, Wink (Dwight Henry), on a remote Delta island dubbed “the Bathtub.” When a flood of Biblical proportions threatens to wipe out their ramshackle community, Wink spearheads the group of locals that attempts to ride it out. His increasingly restless daughter, however, seizes on the opportunity to explore her independence and re-imagines her displacement as a quest to find her absent mother.

Though relying on real-life resonance to create its waterlogged environment, Beasts is remarkable as a vibrant, clamorous American fairy tale in the mold of Mark Twain's puckish chronicles of human fallibility. And like Twain’s most famous adventures, the film privileges a child’s point of view. Director Benh Zeitlin conjures up powerfully uncanny images—thundering herds of prehistoric beasts, floating houses, an alligator used as an IED—that would fit right into the vivid imagination of a kid like Hushpuppy. Wallis’ affecting performance also helps the film hit its tricky notes of magical realism and avoid the beatification of childhood innocence. If there’s a problem with other characters’ attempts to mentor Hushpuppy, it’s that her obstinate nature and stormy relationship with Wink makes the constant encouragement of her self-reliance somewhat redundant. But by skeptically crinkling her nose at Wink’s demonstrations of tough love, she’s still able to convey her discomfort in discovering that the world can be a harsh place.

More of a sensual experience than a narrative exclamation, Beasts takes its time brewing an intoxicating blend of gauzy photography, emotional immediacy, and straight-up tall tales. When it all comes together, it’s sublime—a supple flashback where Wink finally reveals his softness for Hushpuppy’s mother establishes her beguiling presence without ever showing her face. There’s a sudden sense of urgency when the Bathtub refugees are hauled off to a group shelter, exacerbating an illness that Wink has (unsuccessfully) tried to keep his daughter from discovering. But Hushpuppy is sharp enough to understand how he’s terrified of losing his dignity. She observes that the onshore world deals with a “sick animal” by plugging it into the wall, and connects it to that world’s refusal to let the Bathtub struggle and survive on its own terms. Positing kin and community as forces stronger than natural disaster, Beasts of the Southern Wild affirms that a way of life is synonymous with life itself and is worth fighting for, come hell or high water.

Email ThisBlogThis!Share to TwitterShare to FacebookShare to Pinterest
Labels: Beasts of the Southern Wild, reviews