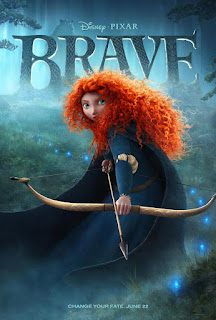 Brave (2012)
Dir. Mark Andrews, Brenda Chapman, and Steve Purcell
3.5 out of 5
Back in 2010, Disney released an animated film that featured a headstrong teenage girl struggling to make sense of her lineage while bristling under the thumb of a strict mother figure. That film was Tangled, a retelling of the Rapunzel fairy tale that reinforced its old-school themes as much as it riffed on them. It’s somewhat surprising, then, to see all those elements pop up again in Pixar’s Brave, a gorgeously-realized film that carries the studio’s mannered execution but assumes the shape of a traditional animated fantasy—with the requisite modern tweaks to the princess formula. The result is a contented hybrid of a film with new technology applied to an old yarn in a way that, while not entirely fresh, is altogether satisfying.

Merida (Kelly Macdonald) is the rebellious daughter of King Fergus (Billy Connolly) and Queen Elinor (Emma Thompson), the rulers of a thriving clan in the ancient Scottish highlands. A tomboyish wild child who has no interest in learning courtly manners, Merida has a falling out with her mother when she’s offered for betrothal to the worthiest of three competing clans. The proto-feminist narrative takes a detour into the supernatural as she seeks out a witch to provide a spell that can “change fate” and convince Elinor to let Merida follow her own path. But the spell has unintended consequences that make Merida and Elinor dependent on each other for survival as they try to prevent testosterone-fueled tensions from escalating into unnecessary violence.

Brave represents several firsts for Pixar: its first female protagonist, first period setting, first story based in legend and folklore. That last element makes it feel especially like a tale cast from the typical Disney mold and gives the ensuing drama a disappointing off-the-shelf vibe. It’s also arguably the most moralistic entry in the Pixar canon, though the filmmakers are careful not to confuse simple platitudes for real emotional heft. Despite the muscular rhetoric of Fergus and his rival clan leaders, the threat of war isn’t as urgent as the dissolution of the mother-daughter bond.

The entire affair is heavy on professionalism and craft but light on whimsy (or at least an alternative to the slapstick hijinks of Merida’s brothers, a trio of terrible toddlers). Connolly’s twinkly beefcake is one of the few light touches in an unquestionably dark film that emphasizes its stunning visuals. Details like Merida’s unruly shock of red hair are painstakingly rendered, and the brooding Scottish landscape creates an environment as expansive as any live-action epic. Unfortunately, the story struggles to live up to the grandeur of the images. It needs to be more than a mixed-message commentary on gender roles—matriarchal power is mostly limited to getting men to lay down their grudges, though some critics detect LGBT undertones. Brave stirs in the right amounts of suspense and sentimentality in showing that positive relationships are often the result of compromise, but it ultimately follows a scenic route to a familiar destination.