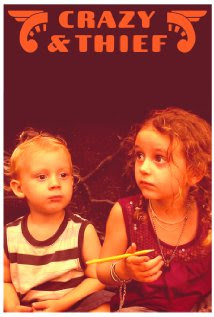 2.5 out of 5
For a filmmaker with only one feature-length movie to his credit (2001’s The American Astronaut), Cory McAbee has a sizable and somewhat inexplicable cult following. Some of that notoriety stems from fronting the surrealist rock band The Billy Nayer Show, as well as occasional media projects like the web serial Stingray Sam. He uses cinematic language like a Rosetta stone (or, on occasion, a whipping post) for the deepest and weirdest parts of his psyche, unapologetically following his muse wherever it leads him, and his dream-like imagery can punish or illuminate depending on how much is lost in translation. Even his most ardent fans don’t always know what they’re getting into when the words “A Cory McAbee Film” appear onscreen.

Anybody expecting his typically skewed view in Crazy and Thief, however, may be surprised at how relatively tame it is. That’s unquestionably a function of its lead actors: McAbee’s seven-year-old daughter Willa and his two-year-old son John. As they toddle around New York City without parental supervision, they imagine themselves as a renegade duo of explorers—she’s “Crazy,” he’s “Thief”—following a haphazard path dictated by graphics of stars depicted on storefronts, advertisements, and street murals. Two adults eventually interrupt the kids’ idyllic wanderings. One’s an urban crackpot (Greg Russell Cook) whose advice to seek the Star of Bethlehem compels the kids to hop a train out of the city. The other is a kindly painter/handyman (Graham Stanford) who intercepts the children at their destination and tries to figure out where they really belong.

Crazy and Thief walks a fine line between presenting a sweet fable of unspoiled childhood and being one of the most indulgent home movies ever made. Bursts of creative madness are few and far between as McAbee takes gentler inspiration from his own inner child. Disappointingly, this child seems to favor tedious scenes of playtime and walking—so much walking. The film’s weirdness is confined to its tone: McAbee can spoon on the saccharine, but he also has a strangely offhand way of putting his kids in peril. This too requires a delicate touch. The McAbee-composed music helps lend a pleasantly silly vibe to Willa and John’s unsupervised adventures, turning Crazy and Thief into something along the lines of a Raffi video mixtape. But the adult characters introduced to flesh out the plot also contribute an unintended menace and give the movie an off-putting subtext. Generously padded even at less than 60 minutes, Crazy and Thief is an idealized Kodak moment of a film interspersed with amusing from-the-mouths-of-babes situations. But as movies go, it’s probably more suited for family gatherings than general audiences.

This review was originally posted to Screen Invasion.
Posted by Eric Ambler at 2:17 PM

Email ThisBlogThis!Share to TwitterShare to FacebookShare to Pinterest
Labels: Crazy and Thief, reviews