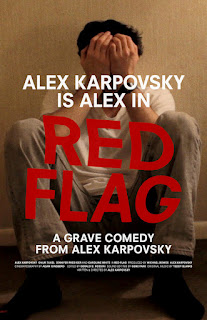 Red Flag stars writer-director Alex Karpovsky as Alex Karpovsky, an independent filmmaker fresh off a breakup with his girlfriend of 5 years (Caroline White). As he embarks on a promotional tour for his quirky nature mockumentary, Karpovsky launches into a downward spiral of loneliness and self-pity that’s exacerbated by the monotony of the road. The two connections he does make are mostly regrettable: an obsessed fan (Jennifer Prediger) with whom he has an ill-advised one night stand, and his somewhat estranged friend (Onur Tukel), a spacey children’s book illustrator. Both of these misfits tag along with the director as he traverses the southern United States, providing Red Flag with a surprisingly tense love quadrangle in addition to the wacky hijinks that annoy Karpovsky as he tries to make sense of the life he willingly turned upside down.

The film’s potentially distracting meta-ness (the movie Karpovsky stumps for is Woodpecker, an actual previous credit) is offset by the way it navigates the conventions of “bad trip” movies. Mediocre motel rooms, physical ailments, and irritating companions set a comedic backdrop similar to Planes, Trains, and Automobiles or the Vacation series but with a much more grounded lead performance. Karpovsky doesn’t overindulge in cartoonish rage. Instead, he falls apart in little pieces. It’s an escalating chain of negative reactions from bemusement to exasperation to full-on delusion as he tries to convince the woman he just abandoned to fly to Louisiana so he can attempt to execute a poorly-timed reconciliation. Credit also goes to Karpovsky’s tormentors, who know exactly how to push his buttons. Tukel’s destiny and death-obsessed man-child is a standout in this regard, enlivening his scenes with a flip so-it-goes attitude that plays well against his friend’s puckered anxiety.

Still, Red Flag elicits more cringes than belly laughs. Karpovsky has no qualms about presenting himself as an irredeemable screw-up and accomplished bullshitter pathetically clinging to any semblance of success. (A scene near the end of the film finds him presenting the movie-within-the-movie to a class of glazed-over schoolkids.) Red Flag's achingly personal, warts-and-all style will draw obvious comparisons to Lena Dunham, who cast Karpovsky in her debut feature Tiny Furniture, as well as her HBO series Girls. Though the jokes in Red Flag are easier to digest than Dunham's queasy humor, its dramatic outlook is considerably bleaker and its tonal shifts can be a little jarring. Nonetheless, Karpovsky makes some very brave choices, taking his character to a place where many of us fear to tread, beyond the bend in the road where there's no room to turn back, and proves that sometimes you have to hit a dead end before you can begin to chart a new course.