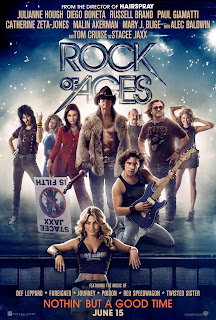 Rock of Ages (2012)
Dir. Adam Shankman
2.5 out of 5
It doesn’t take long for the ‘80s glam metal musical Rock of Ages to announce itself as a thick slab of Aquanet-and-spandex-inspired cheese—making her way from Oklahoma to Los Angeles to fulfill her dreams of rock stardom, Sherrie (Julianne Hough) gets four lines into “Sister Christian” before an entire busload of people is crooning along. The rest of the film is just as brassy and bombastic, an uninhibited ode to the sloppy excess of rock bands and the groupies who love them. It’s 1987, and the hottest club on L.A.'s Sunset Strip is the Bourbon Room, where aspiring rocker Drew (Diego Boneta) works under the employ of the establishment’s slightly addled owner (Alec Baldwin) and sarcastic manager (Russell Brand). Meanwhile, the mayor’s wife (Catherine Zeta-Jones), a conservative scold bemoaning the corrupting influence of rock ‘n roll, schemes to shut down the club by demanding repayment of delinquent taxes. Suddenly, the Bourbon’s financial future is dependent on erratic rock legend Stacee Jaxx (Tom Cruise), whose band is playing one last show at the venue before he goes solo.

Rock of Ages is a hammy, painfully literal piece of filmmaking that never stops trying to top itself. While this leads to some inspired (and even subversive) sequences, the film can’t sustain such a high level of energy throughout an overstuffed plot that has the nasty habit of pushing its best performers to the margins. The squeaky-clean Hough is slightly miscast as a diehard rock ‘n roller, but she tackles her character’s clichéd arc with a winning enthusiasm. Plus she’s tough as nails compared to her love interest, Boneta, who has the babyface of a glam rocker but none of the attitude. That’s a shame, since the rest of the casting is nearly perfect. Cruise brings a welcome unpredictability to his scenes as a batshit Axl Rose/Jim Morrison hybrid—especially when playing against his weasely manager (Paul Giamatti)—and the underutilized Zeta-Jones is a fantastic hoofer and a commanding presence in the movie’s two most impressive musical numbers. A Rolling Stone journalist who falls for Jaxx (Malin Ackerman) and a strip club madam who tends to a down-and-out Sherrie (Mary J. Blige) are thinly drawn but enjoyable additions to the film’s seedy chorus.

The movie’s appeal is directly tied to the musical era it celebrates, which is actually something that Rock of Ages struggles to pin down. The music is a mishmash of new wave, arena rock, and hair metal, with a heavy emphasis on the last category. But for a jukebox musical, it definitely has a bunch of skippable filler—a soundtrack with no less than three Foreigner songs is practically inviting criticism of its sins of omission. At least Adam Shankman’s direction is good-natured and fully aware of its ridiculous mission, and he can get away with things that would never, ever fly in most movies. (See: Zeta-Jones singing an erotically charged version of “Hit Me With Your Best Shot” in a Catholic church while husband Bryan Cranston experiments with rosary-assisted bondage in the parish office.) While Rock of Ages promises nothin’ but a good time, it is really nothin’ but empty nostalgia, another blotto, unfocused approximation of a bygone age.

Email ThisBlogThis!Share to TwitterShare to FacebookShare to Pinterest
Labels: reviews, Rock of Ages