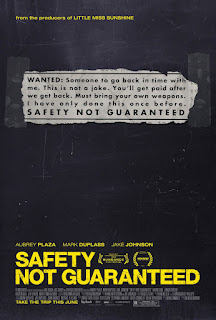 A movie sourced from a fake classified ad planted in a survivalist magazine (that later grew into a popular Internet meme with its own YTMND) already starts out with one foot in the hole, so it’s something of a miracle that Safety Not Guaranteed is able to construct a coherent, entertaining story out of what is essentially a 15-year-old practical joke. Screenwriter Derek Connolly uses the cryptic text – which begins “Wanted: someone to go back in time with me” and is peppered with disclaimers like “I have only done this once before” and, of course, “Safety not guaranteed” – as unexpected inspiration for a low-key dramedy about the ways people cope with their regrets. Darius (Aubrey Plaza) is a bored intern at a Seattle-based magazine where her boss, Jeff (Jake Johnson), stumbles upon the ad and smells a story. He drags Darius and her shy fellow intern Arnau (Karan Soni) on a road trip to track down the ad’s author. The man they find is Kenneth (Mark Duplass), an eccentric thirtysomething grocery store clerk whose conversations veer toward arcane pseudoscience, wilderness survival tactics, and conspiracy theories about the unseen authorities shadowing him. When Jeff’s intrinsic smarminess proves to be a deal-breaker for Kenneth, it’s Darius who deadpans her way into the crackpot’s good graces—and, eventually, his heart.

It’s not always easy to see where this one is going. First-time director Colin Trevorrow gradually reveals kernels of information about Kenneth, whose intense nature is nonetheless simplistic and childlike. His adolescent obsessions with martial arts (he’s rarely spotted without a headband) and cloak-and-dagger games conceal an obvious emotional trauma that isn’t fully understood until much later. However, the toughest nut to crack often has a way with getting others to yield: Darius’s prickliness is explained when she opens up to Kenneth about her mother’s untimely passing. In the film’s other main plot thread, Jeff has a brief reunion with his high school sweetheart (Jenica Bergere) that forces him to consider how he’s squandered his youth, which he tries to resist by hectoring a hesitant Arnau through various rites of young adulthood. Set next to the tentative bond developed by Darius and Jeff, these sequences make it seems like Trevorrow is assembling the pieces to a larger thematic puzzle about the journey toward maturity. But despite solid work by the entire cast, the finished image doesn’t quite match the one on the box.

Torn between its winningly low-key story of oddball romance and its diversions into the realm of Michel Gondry-esque fairy tales, Safety Not Guaranteed makes a noble effort to serve both of its masters. But much like Kenneth’s overblown stories of hardship and heroism, there’s just something a bit off-putting about the combination of realism and fantasy. The notes of whimsy don’t suit the film’s grounded nature, and the attempt to put a question mark on the ending registers as confusing instead of beguiling. It feels like a cop-out, as if the film is alternately thrilled and terrified by its own open-endedness. At least Duplass is game—he combines know-it-all bluster with zither-playing sensitivity in his best turn yet, and playing aside him seems to have inspired Plaza to add some warmth to her prickly persona. Who wouldn’t be curious to see what his endgame is?

Email ThisBlogThis!Share to TwitterShare to FacebookShare to Pinterest
Labels: reviews, Safety Not Guaranteed