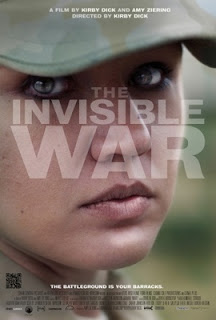 The Invisible War (2012)
Dir. Kirby Dick
4.5 out of 5
A thorough examination of sexual assault in the United States military, Kirby Dick’s documentary The Invisible War is a scathing critique of the armed forces and its tight-lipped response to its well-documented problem of systemic sexual abuse and rape. Though the issue has political dimensions, this is not a political film. It is a film about the denial of justice and of basic human dignity, at the crux of which is a difficult question: How much can we trust our institutions when they fail to protect the people who protect us?

The Invisible War begins with a disclaimer that all statistics reported in the film come from official Department of Defense documents. The numbers are damning. Of the thousands of cases that are reported annually, only a small percentage of them result in any sort of conviction (with punishments sometimes as light as a fine and an extra work detail). Of course, there are a great many additional cases that go unreported or ignored. Why bother, the victims say, when the principal investigators are their direct superiors and often friends of the perpetrators, and are liable to threaten the victim with a court martial for lying. It is immeasurably sad to see these servicewomen (and one serviceman) describe how the military – which all of them, as volunteers, once held in such high esteem – has let them down. In these interviews, it’s clear that the current failure to redress this issue immeasurably weakens the military as a whole. Mistakes as big as these reverberate across generations. When Dick raises the question of whether any of the victims would permit their daughters to enlist someday, the answer is a unanimous “no.”

The film excels in extracting the raw emotions from a topic that military brass is eager to couch in bureaucratic legalese. Though Dick elicits blood-boiling stories from victims across all branches of the military, he locates a strong narrative thread in Kori Cioca, a discharged Coast Guard vet struggling to secure medical benefits for injuries she sustained the night one of her superiors assaulted her. The nerves in her face are damaged so severely that she cannot go outside on a particularly cold day. A real spitfire, Cioca joins a class action suit of several female veterans against the military and tells her story to appalled legislators in Washington, D.C.

Dick’s only misstep is treating the military viewpoint like a straw man from time to time. His interview with Dr. Kaye Whitley, the director of the military’s sexual assault prevention initiative, is cut up into segments of dodged questions and vague answers juxtaposed with admittedly laughable snippets from current training videos. Still, The Invisible War is an impeccably researched film and it carries a strong emotional charge. As in his films scrutinizing the MPAA (This Film Is Not Yet Rated) and the Catholic Church (Twist of Faith), Dick is at his best when taking aim at closed systems that are antithetical to American ideals of transparency and equality under the law. He’s well on his way to changing hearts and minds – U.S. Secretary of Defense Leon Panetta recently cited The Invisible War when making changes to the way the military handles sexual assault cases. Though there’s still work to be done, that can only give hope to the heroes who have been maligned simply for exhibiting the courage that made them so valuable to the military in the first place.

Email ThisBlogThis!Share to TwitterShare to FacebookShare to Pinterest
Labels: reviews, The Invisible War