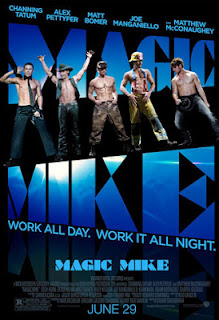 Channing Tatum’s rapid ascent to the Hollywood A-list over the past 9 months epitomizes the fickle nature of success, equal parts hard work and plain old luck. That’s also a theme emphasized by Magic Mike – the latest offering in the Year of the Tatum – a film based on his experiences as a 19-year-old stripper in Tampa, Florida. And while the subject easily lends itself to prurient spectacle (and I promise you, there’s plenty of that in Magic Mike), there is a sincere effort to engage the audience with a certain amount of verisimilitude. The Full Monty this ain’t. Like any strip show, Magic Mike promises more than it can ultimately deliver, but it dutifully mines this world of exhilarating highs and desperate lows for something to say about the way life can break in ways you never intended.

The film’s inquisitiveness has a lot to do with its director, Steven Soderbergh, for whom Magic Mike is his second genre exercise of 2012 - this time, a lurid backstage drama. Adam (Alex Pettyfer) is a college dropout living on his sister’s couch when he meets Mike Lane (Tatum), a construction worker whose truck, clothes, and apartment suggest a healthy supplemental income. It’s all courtesy of “Magic” Mike, his stripping alter ego at Club Xquisite, an all-male dance revue with elaborate routines that invariably culminate in the dry-humping of some intrepid audience member. He recruits Adam to join the baby-oiled ranks of dancers managed by Dallas (Matthew McConaughey, repeating the word “alright” at world-record pace), the club owner with a plan to move the show to Miami and a promise to reward the loyal Mike with a partial ownership stake.

Though there is potential for a nightmarish Boogie Nights-style turn – Adam even lays a Reed Rothchild-like “We should be best friends” on Mike during the fun, flighty first chapter of their relationship – it’s a decidedly heroic twist on Tatum’s own origin story. Mike’s predictable eyes-wide-open epiphanies and wearying flirtation with Brooke (Cody Horn), Adam’s aforementioned sister, quickly overshadow Magic Mike’s darker aspects. But Soderbergh seems genuinely interested in these characters as human beings. There’s an unexpected intimacy in the way he shoots scenes outside the club. His quasi-improvisational approach leads to some wonderfully unguarded moments from Tatum and McConaughey, even if this philosophy exposes the cast’s painfully limited comedic range.

Range is also an issue when the film takes a sharper turn into melodrama in the last half hour. Tatum does his best to carry the weight, but the script glosses over the consequences of its characters’ unchecked debauchery. The rest of the strippers don’t amount to much more than eye candy and have little bearing on the plot – though the sight of a man named Big Dick Richie (Joe Manganiello) wearing granny glasses while mending his gold thong is a flourish to savor. Magic Mike’s increasingly tepid attempts to play it straight don’t have any bearing on Tatum’s virtuosic strip routines or McConaughey’s deviously self-aware performance; in the end, it’s all about having a good time. It’s nice to acknowledge some of the drawbacks to disrobing for cash, but why ruin all the fun?
Posted by Eric Ambler at 12:00 PM