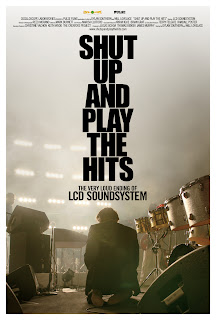 Shut Up and Play the Hits (2012)
Dir. Dylan Southern and Will Lovelace

“If it’s a funeral, let’s have the best funeral ever” – so reads the epitaph that accompanies Shut Up and Play the Hits, a documentary chronicling the final concert of the New York dance-punk outfit LCD Soundsystem. Yet the proceedings at a sold-out Madison Square Garden in April 2011 are like an Irish wake or, more accurately, a tent revival. It’s a religious experience for the true believers, a rapturous rock roadshow incongruously held at a famous athletic battleground – “a boxing arena” in the words of LCD’s frontman and dictator-for-life, James Murphy. The funereal vibe arrives the next day, with cameras observing Murphy puttering about town as the finality of the event sinks in. Co-directors Dylan Southern and Will Lovelace intercut this candid footage with raucous performances from the MSG show (featuring a few surprise guests, Last Waltz-style) and snippets of Murphy’s pre-concert interview with music journalist Chuck Klosterman.

Onstage and backstage, Murphy is a maestro of micromanagement, twiddling knobs and doling out wristbands. Offstage, he almost sounds unprepared for Klosterman’s aggressive questioning, as if he hadn’t anticipated people demanding an explanation for breaking up one of the most critically and artistically successful acts of the decade. That same uncertainty, the film suggests, may be at the heart of Murphy’s decision. He doesn’t believe he was born to play the rock star (despite being very good at it), and pinpoints the moment when he realized that his own musical heroes were also just regular folks with errands to run and obligations to meet. Like a grown-up hipster Thoreau, there’s a part of him that sees having the coolest band in America as a grueling workaday responsibility cultivating a quiet desperation for a simpler life. The film’s emphasis of this theme – with boring, uncinematic interludes of Murphy shaving or cleaning an espresso machine – is a little too on-the-nose. More subtly satisfying is the hint of weariness captured in Murphy’s terse day-after conversations with his manager, Keith Woods, a leonine music biz lifer.

Devoting a healthy chunk of its running time (more than a third) to non-performance footage, Shut Up and Play the Hits has the tenor of a vanity project. Southern and Lovelace don’t get to the first song until at least 10 minutes in and constantly interrupt the flow of the performance with Murphy’s verbal digressions – decisions that may inspire audience to grumble the film’s title unironically. But Murphy is clearly the brains of the operation, and Shut Up is a documentary that reflects its subject well. Ping-ponging between exuberance, restlessness, and remorse, it’s a tonally frustrating film that is nonetheless true to the artist’s essence – a club DJ who not only wrote songs about Daft Punk playing at his house but also the about regrets of an aging scenester worried that humbler pleasures have passed him by. “To tell the truth/This could be the last time,” sings a triumphant Murphy at the Garden. But after just one day, when those words really settle and Murphy surveys the band’s gear one last time, he’s breaking down in tears. Mortality can hit any of us like a ton of bricks. It probably hurts more when those bricks are the rubble of the house you just tore down.

Email ThisBlogThis!Share to TwitterShare to FacebookShare to Pinterest
Labels: LCD Soundsystem, reviews, Shut Up and Play the Hits