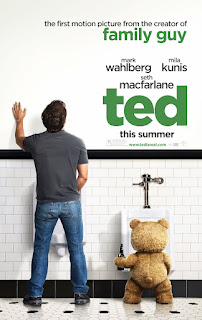 One of the most enduring childhood daydreams is the fantasy in which one’s toys come to life. As Pixar’s trilogy of Toy Story films attests (not to mention everything from Babes in Toyland to Small Soldiers), imagining the rich inner lives of inanimate objects is a common and celebrated pastime. It’s a way that kids learn to process emotions and practice empathy before they have to do it for real. Ted, the first feature-length film from Family Guy creator Seth MacFarlane, turns this whimsical exercise on its ear by extending it all the way to adulthood, where a teddy bear brought to life by a magical Christmas wish has aged into an underachieving wastrel.

Ted (voiced and motioned-captured by Seth MacFarlane) is a profane, pot-smoking plushie whose 15 minutes of fame as a sentient teddy bear are well behind him, and is now living with his grown-up owner/buddy John (Mark Wahlberg). Their adolescent co-dependency irks Lori (Mila Kunis), John’s long-term girlfriend who tolerates Ted’s presence even as she watches her mate stumble his way through a boring job at a rental car agency. Lori finally reaches the end of her rope in a scenario involving Ted, four prostitutes, and the loose interpretation of proper bathroom facilities. She kicks Ted out of the apartment and suggests to John that he'll have more room to grow without Ted’s negative influence in his life.

There’s nothing original in Ted’s bromance vs. romance set-up, but Wahlberg and Kunis are skillful comic performers, and they’re bolstered by ace scene-stealers like Patrick Warburton and Joel McHale. The humor is typical MacFarlane, which is to say that it sometimes teeters on the edge of insufferability. But while he goes overboard on vulgarity, he shows remarkable restraint with pop culture-based gags. It’s a welcome change from a writer whose material often comes stamped with a sell-by date. Instead of settling for a passel of quick Family Guy-style cutaways, MacFarlane spins his nostalgic obsession with the kitschy film adaptation of Flash Gordon into a wonderfully screwy party sequence involving Flash himself – ‘80s beefcake icon Sam J. Jones – chewing the scenery as a blonde-coiffed, hard-partying caricature of a movie star.

Ted isn’t anything more than it purports to be: a potty-mouthed slacker comedy that makes good use of its R rating. In fact, the conceit of Ted being a stuffed animal that acts like a person has little bearing on most of the film. Apart from a wedged-in subplot that features a sublimely weird Giovanni Ribisi abducting Ted as a prize for his sadistic son, it may as well be MacFarlane’s human self in the role. (As for Ribisi, he must be getting tired of playing scuzzy family men with silly accents who kidnap someone close to Wahlberg.) Maybe Ted is supposed to be a metaphor – a projection of John’s unhinged id and a mirror of his failures – but that’s getting a bit heady for a film that takes pride in explaining the mechanics of teddy-on-human sex. Nonetheless, Ted has a wistful little heart, lamenting the way that the magic and mysteries of childhood inevitably disappear within the complacency and conformity of the adult world. Apparently there is a squishy-soft center underneath that boorish exterior.