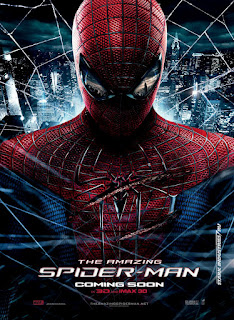 2.5 out of 5
Rebooting a well-known blockbuster franchise only five years after its most recent installment is like working a jigsaw puzzle twice and expecting different results. Yet that is exactly what The Amazing Spider-Man feels like as it remixes the elements of Spidey’s origin story in a way that can’t help but invite comparison to Sam Raimi’s Spider-Man trilogy, even as it attempts to work in direct opposition to those three films. Gone are the candy-colored hues and operatic emotions. In their place are cool, ominous shadows and free-floating angst. It's a more serious spin on the wisecracking wall-crawler, though for a while you kind of wonder what all the fuss is about. This Peter Parker (Andrew Garfield) is lanky, lithe, and twitchy – and a handsome science prodigy. He already has the shell of a superhero and spends the first half-hour of the film patiently waiting to receive his powers. He also has an instantaneous chemistry with the object of his affection, Gwen Stacy (Emma Stone), the police captain’s daughter who seems smarter and funnier than he is.

A prologue reveals that Peter’s father was a prominent scientist before disappearing one rainy night, leaving the young boy in the care of his Aunt May (Sally Field) and Uncle Ben (Martin Sheen). They go on raising Peter as their own until he finds his father’s old briefcase in the basement. It contains the name of an old colleague, Dr. Curt Connors (Rhys Ifans), whom Peter impresses by passing along a long-missing piece of his father’s animal genetics research. Connors is under pressure to develop a miracle cure for his (unseen) terminally ill employer and could use the kid’s help. Peter’s not on the job long when he attracts the bite of a genetically altered spider and humorously copes with the ensuing transformation – at least until his carelessness causes a tragic turn in his home life.

The everything-old-is-new-again approach employed by director Marc Webb puts a damper on the film’s creativity. The film assumes a familiarity with the characters and the basic plot points (which aren’t too complicated to begin with) that precludes the need to do anything interesting with them. Webb then overcompensates with florid symbolism and cheesy attempts at visual poetry. (There’s a head-scratching sequence where Peter triumphantly skateboards to a Coldplay song.) The film gains momentum in its second half once Peter begins to define the Spider-Man persona, evolving from a selfish, vengeful vigilante to community-oriented do-gooder. It’s a strong storyline that overshadows his conflict with Connors, an undersold villain who gains a megalomaniacal streak after injecting himself with a cell-regenerating serum made from reptile DNA. With a talented ensemble cast and a handful of thrilling action sequences, The Amazing Spider-Man at least makes a worthy introduction for the uninitiated. For everyone else, it’s an uncanny palimpsest, recycling the sturdiest bits of the superhero mythos and dressing them up with hit-or-miss accouterments.
Posted by Eric Ambler at 7:00 PM

Email ThisBlogThis!Share to TwitterShare to FacebookShare to Pinterest
Labels: reviews, The Amazing Spider-Man