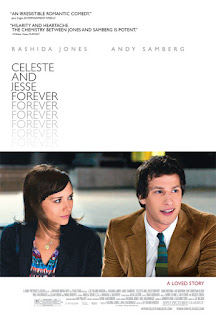 Celeste and Jessie Forever (2012)
Dir. Lee Toland Krieger
3.5 out of 5
The winning dramedy Celeste and Jesse Forever puts a refreshing spin on romantic tropes by zigging when it should zag, and occasionally even running in reverse. Celeste (Rashida Jones), a successful media consultant for a boutique PR firm, and Jesse (Andy Samberg), an unemployed illustrator, are best friends in the midst of dissolving their ill-fated marriage. Their mutual friends are worried that their separation is little too amicable, and accuse them of using their buddy-buddy shenanigans to hide their mutual confusion about the new definition of their relationship. These concerns are validated when Jesse tumbles into bed with Celeste one wine-soaked evening and is not prepared for her cavalier response to their unexpected encounter. By the time Celeste realizes that she may have acted too callously in dismissing him, Jesse’s actions outside their relationship have added to the ripple effect of their sudden estrangement.

Celeste and Jesse Forever is enamored with misdirection, introducing the main characters as a de facto couple with garden-variety issues and a coterie of quippy sidekicks. At first it’s focused mostly on Samberg, a goofy man-child cast from the mold of the schlubby guy whose life gets back on track with the guidance and understanding of a much more ambitious woman. But when Jesse gets his long-awaited kick in the pants from a surprising source, it becomes wholly about Celeste’s struggle to see herself both as a caring friend and a failed partner. Jones, who co-wrote the script with fellow actor Will McCormack, is no stranger to playing nice but uncomplicated straight-woman characters on TV shows like The Office and Parks and Recreation and in films like I Love You Man. The emotionally complex Celeste feels born from the frustration of being typecast as an accessory to self-discovery, and Jones doesn’t fumble her opportunity to shed that image. The many layers of her character are peeled away in a sometimes cloying fashion but, to the movie’s credit, it offers an alternative to the sitcom-like tone of films that try to distill a woman’s personal struggles down to the lack of a suitable mate.

Though her divorce is the catalyst for the story, we get a broader picture of Celeste’s life beyond her romantic woes. The introduction of a dreamy new suitor (Chris Messina) is the film’s major sop to convention, the rare supporting character who sets his own agenda aside to take a proactive role in her self-actualization. Director Lee Toland Krieger is wise to let Jones and McCormack's script set the tone, which is more dramatic than you’d expect for a film stocked with able comedic actors, including a funny Elijah Wood as Celeste’s reserved boss (though Samberg’s character remains oddly petulant and seems to drift in and out of the story). At times it seems like Krieger is straining for laughs, particularly in a D.O.A. subplot involving the management of a Ke$ha-like pop star (Emma Roberts) with boy troubles of her own. Yet the movie confidently rests upon Jones’ empathetic soul-searching performance as she gradually emerges from the protective cocoon of her old life and its familiar habits. The transition from the definitive comfort of “we” to a more vulnerable “I” is bound to be a rocky one – Celeste and Jessie Forever captures it with as much grace and good humor as one can reasonably expect.