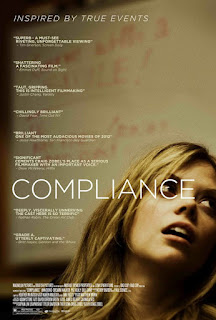 In the early 1960s, the infamous Milgram experiment tested the limits of obedience by having individuals administer (fake) electric shocks to an actor posing as a fellow test subject. The scientist in charge assured them that the punishments were crucial to the experiment’s success, and chided people who expressed reservations, even as the other test subject pretended to be in immense pain. It was hypothesized that all but a small percentage would listen to their conscience and demand that the experiment be stopped. In reality, a majority of people were willing to administer the highest level of electric shock – more than enough to kill a human being – simply because somebody told them they should.

Craig Zobel’s slickly evasive Compliance explores this impulse to obey authority with a story based on true events. The middle-aged, matronly Sandra (Ann Dowd) manages a fast-food restaurant, spending her days wrangling unmotivated teenage employees like Becky (Dreama Walker). A man identifying himself as Officer Daniels (The Innkeepers’ Pat Healy) calls the restaurant to investigate an alleged theft, and asks Sandra to keep an eye on Becky until an officer can arrive. Despite his increasingly insistent and unorthodox demands, Sandra and her staff trust that they are doing the right thing by helping Daniels. But they are immediate marks for the caller, who flatters and cajoles Sandra (and bullies a shell-shocked Becky) until somehow the girl is locked in a storeroom, strip-searched, and placed under the watch of various male guards, including Sandra’s nervous fiancé Van (Bill Camp).

This would all be very incredulous if it didn’t so closely resemble the real-life incident that inspired Zobel’s screenplay. However, veracity doesn’t necessarily translate into profundity. In the difficult-to-watch humiliation of Becky, Zobel tries hard to make Compliance more than a miserable chronicle of human stupidity. The film highlights the subtle differences in the way Daniels handles those who have clearly never been in trouble with the law and those more likely to fear repercussion. But the plotting owes as much to basic ignorance as it does to mysterious psychological urges. It’s also hard to give Zobel the benefit of the doubt when he stacks the deck against Sandra early (it’s the dinnertime rush, she’s running low on supplies after a freezer mishap, and she’s expecting a “secret shopper” from corporate) until it’s a credulity-straining Worst Day Ever.

Compliance rides the line between exploitation and provocation, and seems to be drawing a comparison between our own voyeuristic attraction to a terrible event and Daniels’ fantasies of control (it doesn’t help that Walker is clad in nothing but an apron for two-thirds of the film). Healy excels as a true scumbag, overcoming the glib tone of the scenes that slowly reveal the truth about Daniels. Dowd and Walker also deserve credit for their endurance during the film’s punishing final 30 minutes. Dramatizing a traumatic event can work if it’s done with a clear, honest intention, but too often it seems like Zobel’s performing his own Milgram experiment, thinking about the cleverest way to deliver bigger and bigger shocks without betraying their emptiness.