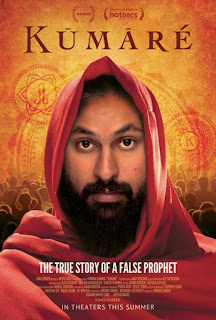 Human spirituality is a tricky topic, one that a lot of movies – even nonfiction ones – have difficulty addressing without some measure of smirking irony or pronounced disillusionment before acknowledging that, hey, maybe we can learn something after all. In the documentary Kumaré, filmmaker Vikram Gandhi doesn’t just adhere to this formula – he embraces it without compunction. Turning his lifelong skepticism of spiritual leaders into an elaborate prank on the inner-peace industry, Gandhi grows out his beard and adopts his mother’s thick Indian accent to pose as the guru Sri Kumaré. He decamps in Arizona with two comely assistants and quickly amasses a small cadre of followers who believe he is the genuine article. Yet as Gandhi learns more about the types of people who seek spiritual guidance, he struggles to understand what exactly he aims to prove by revealing his deception.

Gandhi’s confused sense of purpose is both the film’s redeeming factor and its biggest flaw. His mission to expose the opportunists and phonies within the spiritual community doesn’t preclude him from some cheap jokes at the expense of the gullible, like teaching yoga poses one step away from air guitar and scribbling phallic-looking symbols on his devotees’ foreheads. In an unsurprising development, Gandhi has serious doubts about his enterprise as real, well-meaning people start to believe his seductive fortune-cookie wisdom. Kumaré gradually morphs into a personal crisis of ethics, and Gandhi largely cuts the crap – even reopening his investigation of unscrupulous gurus – as he takes a moment to discern what people find so appealing about his beatific presence.

What seems to surprise Gandhi most is the way that Kumaré’s followers trust him as a sounding board for their burdens. He attracts his share of blithe spirits, but his serious students include former drug addicts, frustrated parents, and people under all kinds of incredible and unique stresses (one woman turns to Kumaré to escape the pressures of her job: defending death row inmates). Portraying a figure of moral authority, Gandhi realizes he has to walk the walk, which means respecting that old religious saw about not judging others too harshly.

Still, Kumaré almost backs into its message of self-reliance. Gandhi tries hard to make everyone the butt of the joke – himself included – but the indiscriminate nature of his charade makes amusement turn into pity rather quickly. At least his heart is in the right place. Though Gandhi begins the film with a preconceived notion of religious doctrine as an imposed set of arbitrary rules, his experience as Kumaré deepens his understanding of the desire for spiritual leadership. Ultimately, Kumaré doesn’t try to convince viewers that all self-styled gurus are bunk – just that we ought to be more honest with ourselves before we accept someone else’s truths.