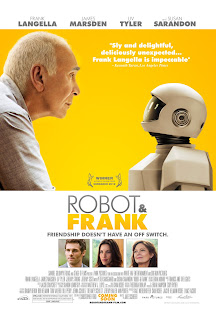 Aging is one of life’s trickier alchemies, and it’s trickier still in the youth-obsessed film industry. Movies are moments frozen in time, but when you start to string those moments into a career arc, a sense of mortality starts to sink in. Ingénues become doting mothers. Action heroes become grizzled mentors. And actors past the retirement age find themselves filling a comedic or sentimental niche that’s often a narrow outlet for their talents. With that in mind, it’s hard not to think of the bittersweet indie sci-fi film Robot and Frank, which features late-blooming stage veteran Frank Langella in one of the juiciest roles of his career, as a commentary on ageism hidden within the trappings of a buddy flick.

In the near future, retired cat burglar Frank (Langella) is settling into his twilight years in rural New York after spending about a quarter of his life in prison. But he’s unwilling to leave the criminal life behind, despite showing the early signs of dementia—the movie opens with Frank breaking into a home that he eventually realizes as his own. When Frank’s son (James Marsden) drops by on one of his weekly check-ins, he brings along a robot butler (voiced by Peter Sarsgaard) that is programmed to improve Frank’s well-being. Though initially resistant to the idea of having a mechanical caretaker, Frank warms to the robot by teaching it how to pick locks and break into secure buildings. Before long, the pair is planning and executing robberies on a scale that attracts the attention of the local sheriff (Jeremy Sisto).

The film’s strength lies in the clever ways it communicates its deeper themes within the confines of a conventional indie dramedy. Director Jake Schreier and writer Christopher Ford skillfully explore Frank’s fears of obsolescence by pitting him against a smarmy nonprofit consultant (Jeremy Strong) who takes over the local library and aims to “re-imagine the library experience” by removing all of its print resources. His sniveling, condescending attitude toward Frank services the movie’s larger point about the lack of multidimensional roles for older actors. But Frank is far from a quaint prop. He’s a rich, complex character with a strong arc as he and the robot develop an almost familial bond. Frank’s monologues to the robot about the triumphs and regrets of his past are moving examples of the kismet between these two creatures with fragile memories.

Beyond that solid central relationship, however, Robot and Frank is rather slight. Frank’s Luddite daughter (Liv Tyler) drops in about halfway through the film to create an unnecessary hurdle, shutting off the robot and insisting on taking care of the old man herself. All it really does is delay the film’s central setpiece, a beautifully-constructed jewelry heist that plays like a mini-Ocean’s Eleven. The antagonists at the other end of the spectrum are drawn in similarly broad strokes, and the third act devolves into cartoonish, credulity-stretching mayhem that upsets the balance of the film’s fun-yet-contemplative tone. But none of this takes much away from Langella’s stunning performance (plus the tandem performance of Sarsgaard and Rachael Ma as the woman in the robot suit) and the film’s heartwarming notion that some things just can’t be replaced by a newer model.

Email ThisBlogThis!Share to TwitterShare to FacebookShare to Pinterest
Labels: reviews, Robot and Frank