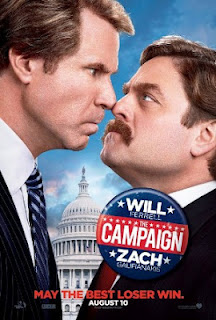 “There’s a lot of fight in this dog,” asserts Marty Huggins (Zack Galifianakis), one of the dim-witted candidates for a North Carolina congressional seat in the light political satire The Campaign. The same could be applied to the movie itself, a decidedly silly but nonetheless pointed strike at the increasingly hypocritical perfidy of American political campaigns. When Democratic incumbent Cam Brady (Will Ferrell) commits a spectacular gaffe by accidentally leaving an explicit phone message at the home of some pious constituents, the rich industrialists Glen and Wade Motch (John Lithgow and Dan Aykroyd) see an opportunity to bankroll a more pliant candidate who will go along with their scheme to build Chinese factories in the U.S. Enter Huggins, an effeminate pug enthusiast and local history booster who’s led to believe that he will be serving the best interests of his beloved hometown. He’s an easy target for Brady’s bullying until the Motches supply a ruthless campaign manager (Dylan McDermott) who ratchets up the mud-slinging to ever more absurd levels.

Director Jay Roach is navigating familiar waters here. After making a name for himself with raunch like the Austin Powers series, Roach has spent the last several years telling stories taken from the broadsides of the American political arena. His HBO television movies Recount and Game Change highlighted real-life events in the 2000 Florida election crisis and the 2008 Republican presidential bid, respectively, but The Campaign is the first time Roach has fully explored the comedic possibilities of political theater. His direction allows Ferrell and Galifianikis to revel in their characters’ outsized egos and petty vendettas without losing the audience’s sympathy. Meanwhile, a solid script by sitcom alums Shawn Harwell and Chris Henchy provides the film a contemporary resonance with concerns about big money’s influence on the political process.

While the actual satire of The Campaign is too broad and obvious to pose any real threat to the status quo (the Motches are an inelegant, China-baiting parody of actual billionaire activists the Koch brothers), the movie’s more sophomoric gags are well-executed by its two big stars and a round of talented supporting players including Jason Sudekis and a very funny McDermott. Ferrell’s horndog hybrid of Bill Clinton and John Edwards is something to behold, but it’s Galifianakis who benefits the most from Roach’s apt direction, breaking free from the confines of his space cadet persona as much as is possible for him to create a sad-sack populist hero in Huggins. The Campaign doesn’t aim to rewrite the rules of political discourse, but it’s a surprisingly biting commentary on how much buffoonery the public will tolerate if it’s presented within the appropriate packaging.
Posted by Eric Ambler at 6:58 PM

Email ThisBlogThis!Share to TwitterShare to FacebookShare to Pinterest
Labels: reviews, The Campaign