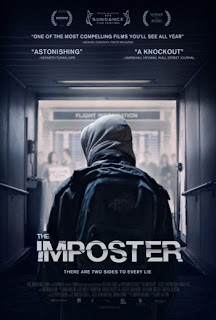 The Imposter (2012)
Dir. Bart Layton
4 out of 5
One evening in 1994, 13-year-old Nicholas Barclay left his home to play basketball in his San Antonio neighborhood and never returned. Three years later, a person claiming to be Nicholas turns up at a Spanish orphanage with disturbing tales of abduction, abuse, and sexual slavery. Despite having dark hair and brown eyes – and speaking English with an obvious French accent – he is identified by Nicholas’ sister as her missing blonde-haired, blue-eyed Texan brother and transported back to the United States. And that’s merely the first half-hour of The Imposter, an absorbing new documentary from Bart Layton that shows how two governments and one grieving family were hoodwinked by a master identity thief.

Combining the typical talking head interviews with actors re-enacting the events surrounding the Barclay case, The Imposter is an addictive experience akin to bingeing on a marathon of a cable documentary series. That’s no accident – Layton’s credits include producing and directing the low-budget guilty pleasure Locked Up Abroad, and he knows exactly how to provide information in small but satisfying-enough amounts to keep the audience hooked. While the re-enactments give The Imposter the air of a jazzed-up TV newsmagazine, these sequences play like vivid, self-contained dramas. Layton cuts back and forth between the accounts of Barclay’s family and their would-be son, with the discrepancies piling up as the boy’s miraculous return attracts the attention of national media and law enforcement. An investigation reveals that the person pretending to be Nicholas Barclay is in fact Frédéric Bourdin, a 23-year-old Frenchman known as “the Chameleon” and wanted by INTERPOL.

The film has yet another dark turn in store and it’s not necessarily the one we’ve been dreading. I should stop describing the plot here, though I will say that at a certain point the twists start to lose their effectiveness. The film rashly invites the audience to put their trust in a confirmed liar, and we are just as easily persuaded to believe anything, including Bourdin’s calculated contrition. That’s effective filmmaking. It’s also manipulative filmmaking, which is also apparent when Layton senses the need for levity and goes looking for local color. He finds it in Charlie Parker, a homespun private investigator who was the first to take his suspicions about “Nicholas” to the FBI, though Parker clearly did more harm than anyone by accepting Bourdin at face value during a revelatory pancake breakfast. The salty PI’s line readings are spectacular, but justifying his continued quixotic pursuit of the case with further attention is a mistake.

It’s easy to wonder why such a blatant con job eluded so many people for months. (Bourdin’s appearance as Nicholas on a late-90s episode of Hard Copy features one of the least convincing “incognito” get-ups you can imagine.) But wouldn’t you be tempted to believe something so miraculous? Everyone in The Imposter is quick to jump to conclusions – save Bourdin, who says he always feared that Nicholas’ family was just a minute away from calling his bluff. That they didn’t raises many intriguing questions, and the film does an excellent job of presenting them without much editorializing. It asks whether we’d rather believe an obvious lie or accept an ugly truth. In a case like this, it’s not easy to tell which choice is more distasteful.

Email ThisBlogThis!Share to TwitterShare to FacebookShare to Pinterest
Labels: reviews, The Imposter