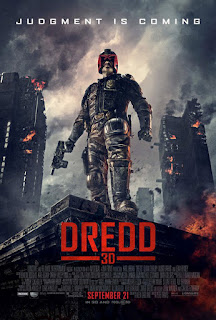 Karl Urban’s chin should receive top billing in Dredd, a sci-fi action film that’s as intractable as its leading man’s jawline.  It’s the second attempt (after the 1995 Sylvester Stallone vehicle Judge Dredd) at packaging the wry, darkly ironic British comic book hero Judge Dredd as a hulking, humorless lawman of a dystopian future where police officers are authorized to sentence and, if necessary, execute captured criminals.  But as a grim, grimy shoot-‘em-up bathed in drab colors, Dredd doesn’t seem to be in on its own joke.  Granted, the lack of humor isn’t a huge problem if audiences are not aware that the film is supposed to be funny.  Dredd is actually doomed by its lack of excitement and originality, fatal flaws for a movie that’s essentially an extended action sequence.

The film starts promisingly enough with a tantalizing glimpse at Dredd’s beat, “Mega City One,” a massive urban sprawl surrounded by a deadly radioactive wasteland.  The exhilaration is fleeting, however, as director Pete Travis quickly shrinks the scope to a single apartment block where psychotic gang leader Ma-Ma (Lena Headey, whose cra-zay unkempt hair and facial scars contradict her sedate performance) is consolidating her power as the sole producer of a dangerous new narcotic called SLO-MO, which is exactly what it sounds like.  Meanwhile, Dredd is asked by his superiors to shepherd new Judge recruit Cassandra Anderson (Olivia Thirlby) on a field training mission.  Her academy test scores are not quite up to snuff, but growing up near Mega City One’s radiation barrier has gifted her with psychic abilities.  It’s one of several clichéd plot devices employed by screenwriter Alex Garland as the Judges fight their way to the top of a skyscraper teeming with Ma-Ma’s armed thugs – a narrative that’s strikingly similar to this year’s acclaimed Indonesian thriller The Raid.

The modicum of character development that occurs before the battle is barely enhanced by the ensuing bloodbath, with Anderson’s backstory struggling to stand out amid the constant din.  Travis forges ahead with a day-in-the-life escapade that unfolds with mind-numbing repetition – shoot, reload, repeat – as generic villains fall in generic battles set against generic backdrops.  Even the movie’s major twist is designed simply as a way to thrust more targets in front of the heroes.  Despite good performances from Urban and Thirlby, Dredd is just more meat for the multiplex grinder, substituting genre shorthand for a strong story and interesting characters.  The film’s failing of ambition is best characterized by Urban’s grandiose gravel-voiced narration, which touts the vastness of his futuristic megalopolis before Dredd promptly reveals itself as little more than a feature-length firefight confined to one location.  The result is a hyper-violent comic adaptation with obvious fascist overtones that amazingly fails to push any buttons at all.  Dredd only has more bullets where its brains should be.