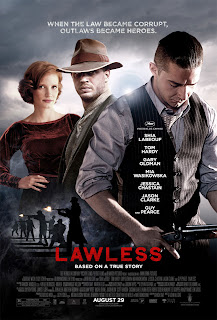 The Prohibition-era crime drama Lawless—based on Matthew Bondurant’s novel about the bootlegging exploits of his relatives in the mountains of southwest Virginia—comes pre-certified with its “based on a true story” bona fides. However, the film’s relationship to historical truth is better described by a memorable line from John Ford’s classic western The Man Who Shot Liberty Valance: “When legend becomes fact, print the legend.” Gangster films are almost obligated to mythologize their subjects, but few are as straightforward about this process as John Hillcoat’s bracing, bloody meditation on criminality and its insular codes of conduct. The Bondurant siblings Howard (Jason Clarke), Forrest (Tom Hardy), and Jack (Shia LaBeouf) run a thriving moonshine operation in a remote area of Appalachia where the profusion of illegal stills illuminates the mountainside “like a goddamn Christmas tree.” Guided by a strict division of labor—taciturn Forrest is the brains, hotheaded Howard is the muscle, and inexperienced Jack is the errand boy—their concern runs with the approval of the local authorities, at least until a corrupt special agent from Chicago, Charlie Rakes (a distressingly eyebrow-less Guy Pearce), arrives in town to extort the producers of the lucrative “white lightning.”

Lawless unfolds at a glacial pace, but viewers familiar with Hillcoat’s previous work in The Proposition and The Road will recognize this as the director’s preferred strategy for calibrating his action sequences for maximum dramatic effect. The film’s depiction of criminality reveals a culture that’s more about the ever-present threat of violence than the violence itself, a game of chess that Forrest has mastered despite outward appearances. But just as Hillcoat begins to reveal the mush-mouthed brilliance of Hardy’s hillbilly mogul, Lawless pulls out the rug and abruptly places the overmatched Jack at the helm of the family business. LaBeouf is perfectly cast as the wannabe player with a chip on his shoulder, an impulsive dreamer with the smarts of his eldest brother but none of the subtlety—his initial purchase after his first big score is the 1930s equivalent of an Escalade. His flashy style helps him romance local Mennonite bishop’s rebellious daughter (a radiant Mia Wasikowska), but it also endangers his relatives and their business partners by raising Rakes’ bloodthirsty ire.

Oscillating between moments of ethereal natural beauty and brutal violence, Lawless emphasizes the differences between the Bondurants’ community-oriented credo and the demoralizing, winner-take-all ethos of urban gangsterism. Those weary with the ways of the city—including fallen Chicago dancer Maggie (Jessica Chastain) and crime boss Floyd Banner (Gary Oldman in a disappointingly limited role)—view the Bondurants’ sense of honor as a refreshing alternative to the ravenous greed and cavalier attitude displayed by Rakes. This thematic tension carries the film as it moves through the rise and fall of LaBeouf’s naïve hotshot, a narrative arc that’s been done hundreds of times before. Hillcoat also balances the more generic aspects of the film with a generous application of local color on the soundtrack and in the visuals (a scene depicting a foot-washing Mennonite ritual beautifully advances the relationship between LaBeouf and Wasikowska without a word of dialogue). While a lesser filmmaker would dwell on the Bondurants’ supposed invulnerability—a somewhat cheesy notion introduced early in the story as a widely-believed local superstition—Hillcoat is determined to save his bullets. Instead of presenting the Bondurant legend as a towering inevitability and working backwards from there, Lawless slowly builds it brick by brick until it resembles the stone-cold truth.