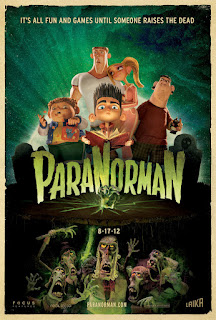 Zombie lore’s slow infestation of mainstream pop culture over the past decade or so has wrought plenty of memorable work (Shaun of the Dead, Zombieland, Zack Snyder’s Dawn of the Dead remake) and even more tongue-in-cheek kitsch (the zombie walks, the apocalypse clubs). In this climate, it’s shocking that Hollywood took this long to produce a movie like ParaNorman – a gorgeous stop-motion animated adventure that also achieves the distinction of being the first zombie flick for families. The Massachusetts hamlet of Blithe Hollow is home to Norman (voiced by The Road’s Kodi Smit-McPhee), a lonely boy who can speak to the dead. Norman has trouble convincing anyone of his abilities, except for fellow social outcast Neil (Tucker Albrizzi) and the raving town hermit Mr. Prenderghast (John Goodman), a self-professed medium who warns Norman that his special gift is the only thing that can prevent an impending supernatural calamity.

ParaNorman’s cheeky homage to zombie horror extends to the genre’s thematic overtones of prejudice and the mob mentality. Blithe Hollow is one of those famously provincial New England towns proud of its long history – even if that history includes a legacy of colonial witch hunts and the persecution of its eccentrics. Norman is justifiably uneasy about investigating Prenderghast’s claim, even more so when he discovers that it’s true: he is part of a line of mediums that has been keeping a witch’s curse at bay for 300 years. When the dead begin to rise and shuffle towards town, Norman must join forces with the frightened skeptics – including his sister Courtney (Anna Kendrick) and the school bully (Christopher Mintz-Plasse) – to convince everyone that it’s all part of the witch’s vengeful plan that preys on their collective superstition and ignorance of the past.

The direction of first-time helmer Chris Butler (who also scripted) and Aardman Animation veteran Sam Fell (Flushed Away) is a little too on the nose – the townspeople are quick to take to the street with torches and pitchforks – but their use of clichés is not intended as a narrative crutch. Like Laika Studios’ similarly phantasmagoric fantasy Coraline, it exaggerates something familiar to use as a gateway into something much more sinister. Combining silly sight gags and broad humor with a dark plot about reanimated corpses and the murder of an innocent is a tricky feat. But it’s one that Butler and Fell pull off with the help of stunning puppetry and breathtaking sets from the same team behind Coraline, as well as a pulsating Jon Brion score that incorporates elements of synth-laced ‘80s horror soundtracks. Smartly and subtly acknowledging how people create distortions – a la the shameless statue of a hideous old hag in Blithe Hollow’s town square – to avoid confronting their true fears, ParaNorman is a wonderfully weird expression of atypical heroism in the guise of a typically goofy riff on the modern zombie phenomenon.