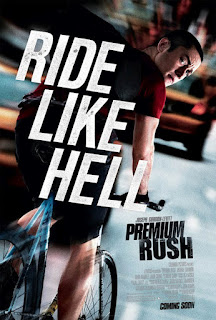 It’s hard to watch a film set in a post-Giuliani New York City and not wonder whether it would even be recognizable to certain denizens of its famed cinematic past.  The greedy, seedy city of Ratso Rizzo, Popeye Doyle, and Travis Bickle has transformed over the years into a place suitable for tourists, gentrifying families, and Garry Marshall rom-coms.  Thank goodness, then, that the city’s overwhelming rudeness endures as a main theme of Premium Rush, a colorful, carefree chase film set in the world of New York’s renegade bicycle couriers.

Unfolding more or less in real time – several flashbacks allow for some fudging of the timeline – the film follows Wilee (Joseph Gordon-Levitt), a brash bike messenger who has forgone a potential career in law for the white-knuckle thrill of piloting his fixed gear, brakeless two-wheeler through thick swarms of Manhattan traffic.  He believes that his way is always the right of way, pedestrians and motorists and red lights be damned.  Wilee’s recklessness comes in handy when he is summoned to deliver an especially sensitive item coveted by Bobby Monday (Michael Shannon), a dirty cop with a weakness for Chinese gambling parlors.  With the help of his former flame (Dania Ramirez), Wilee evades authorities both crooked and legitimate in his noble quest to keep New York’s ambulance companies in business.

Premium Rush is a quintessentially ‘90s action movie jazzed up for the iGeneration with flashy map graphics and a time-skipping narrative that crams as much as possible into the film’s harried 90-minute runtime.  The breakneck pacing makes it easy to forgive (or forget) the many contrivances required to grease the mechanisms of David Koepp and John Kamps’ surprisingly profane script (it represents a new benchmark for use of the word “shit” in a PG-13 movie).  But Koepp, who also directed, has more than willing volunteers/victims in Gordon-Levitt and Shannon, two guys who seem like they’d run through a brick wall if the role called for it.  And in Gordon-Levitt’s case, it kinda does – the end credits reveal that the star smashed into the back of a taxi while performing some of the film’s thrilling stunt work.

Much like its plucky protagonist, Premium Rush succeeds by being constantly on the move, masking its narrative flaws with superbly orchestrated action.  Gordon-Levitt also manages to bring a certain charm to his insufferably cocksure character.  The smug, sarcastic, and irresponsible Wilee is astoundingly played as a straight-up hero – a gutsy decision that only works because everyone else around him is made to be an even bigger asshole, from the sniveling, lying, woman-throttling Monday to Wilee’s impossibly muscular professional and romantic rival (Wolé Parks).  Zippy and deliriously fun, Premium Rush can’t sustain its devil-may-care posturing as it happily chugs along to a laughably old-fashioned conclusion; still, it excels as a nostalgic B-movie for adults old enough to know better, but young enough not to care.
Posted by Eric Ambler at 9:37 PM