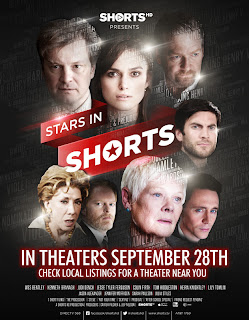 The carnival-barker title of Stars in Shorts is practically begging for an exclamation point, but its appeal to name recognition makes commercial sense:  it’s an attempt to position short films as something other than film festival fodder or the things that screw up people’s Oscar ballots.  The seven-film anthology is a noble experiment that seeks to build on the success of the annual programs of Academy Award-nominated shorts (compilations of the contending live action, documentary, and animated shorts have been arthouse staples since 2006).  It’s also a bold inversion of the short film tradition, which has historically been a showcase for new writing and directing talent.  Those glimpses of creative vision are indeed present across the whole of Stars in Shorts, though they are a bit harder to see due to the hit-and-miss quality and haphazard organization of its individual pieces.

Shorts begins promisingly with two films that harbor a distinctive voice behind the high-profile casting.  First is “The Procession,” starring Lily Tomlin and Modern Family’s Jesse Tyler Ferguson as a bickering mother and son who get lost on the way to the burial of a woman they do not know very well.  It’s a simple, well-executed idea that’s no more complex that the typical A-plot of a sitcom episode.  Its timing is impeccable, though, with Tomlin having a field day casually tossing out the backhanded reassurances (“You’re not stupid…you’re just bad at patterns.”) that provoke Ferguson’s neuroses. Written and directed by Rupert Friend, “Steve” ratchets up the quirkiness with Colin Firth’s titular downstairs neighbor who interrupts a constantly arguing couple (Keira Knightley and Tom Mison) with rambling small talk and incessant demands for tea.  It’s a strangely intimate slice of life and a relationship triangle that’s stuck at its most awkward stages—the beginning and the end.

Brevity and humor seem to be the key elements to success in Shorts.  The longer segments – like the incessantly grey, prosaic sci-fi tale “Prodigal,” which squanders a menacing turn by Kenneth Branagh, or the drawn-out musical Hollywood in-joke “Not Your Time” – pale in comparison to ones that are quick with a punchline.  Like “Prodigal,” the Neil LaBute-penned entries “Sexting” (which LaBute also directed) and “After School Special” are both reliant on surprise twist endings, but at least they get to the point.  Clocking in at less than 20 minutes combined, these two films are like nasty little palate cleansers between the more languid main courses.

Stars in Shorts can’t escape the fact that it’s a film-by-committee, but the flaws are mostly in the programming.  Part of the reason why shorts work best in festival formats is the ability to match them up with other films that make good tonal companions.  The shorts collected here have little in common beyond the famous faces that appear in them, opening the door for some middling work to be rewarded for crony casting.  At least the curators of Stars in Shorts hit a high note with the sweet “Friend Request Pending,” featuring Judi Dench navigating the pitfalls and politics of online relationships.  The central conceit of an older woman fretting about less mature concerns – like whether to use “LOL” in a chat with her crush – is met with sympathy rather than novelty, giving it a refreshing lived-in feel.  The Chris Foggin-directed short is such a stellar example of the form that making it share the same billing with the some of the other cinematic hit-and-runs almost seems unfair.
Posted by Eric Ambler at 7:49 PM

Email ThisBlogThis!Share to TwitterShare to FacebookShare to Pinterest
Labels: reviews, Stars in Shorts