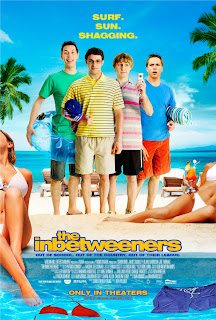 When it comes to actual sex in a teen sex comedy, words speak louder than actions. That much is definitely true in the rude, ribald British comedy The Inbetweeners, a film that exhausts all its synonyms for human genitalia within the first 15 minutes. (Our transatlantic cousins are second-to-none in creating euphemisms for “vagina.”) Look past the acrobatic slang, though, and you’ll find a disarmingly honest and charming film about the preoccupations of dirty minds. An extension of the popular British sitcom of the same name, the movie finds four social misfits fresh out of high school – pedantic intellectual Will (Simon Bird), lovesick spaz Simon (Joe Thomas), vulgar horndog Jay (James Buckley), and amiable dimwit Neil (Blake Harrison) – taking a “lads’ holiday” to a Greek resort in dogged pursuit of carnal pleasures. What they find, however, is a replay of the same frustration, embarrassment, and abject misery that defined their lives at home. It’s soon a race to the bottom for the members of the self-proclaimed “Pussay Patrol” as they try to escape their vacation with a modicum of self-respect.

In its television incarnation, The Inbetweeners owed more to twisted American sitcoms like It’s Always Sunny in Philadelphia and Arrested Development with its deeply flawed protagonists and their refusal to know any better despite their constant comeuppance. The movie serves up more of the same, yet also provides a glimmer of hope by introducing the boys to a quartet of bemused girls who aren’t immediately put off by their obvious personality defects. Hijinks and humiliations ensue in a style reminiscent of Superbad and the American Pie series as the lads haltingly pursue their holiday crushes. But in true European fashion, The Inbetweeners’ tales of thwarted sexual ambition skew darker than its starry-eyed American counterparts. Series co-creators and screenwriters Damon Beesley and Iain Morris aren’t afraid to show sides of their protagonists that are downright selfish, ignorant, and mean – often all at once, and often through Jay, a lecherous foulmouth who kicks off his vacation by groping a bar hostess and pushing a child into a swimming pool.

It’s not hard to tell that such bravado hides massive insecurities, and The Inbetweeners softens its rhetoric in time for the third act, a massive plot-resolving boat party. That isn’t to say that the film doesn’t earn its payoffs (though some punchlines might feel a bit familiar to fans of the series), just that it’s much better at constructing a joke than a believable (and lasting) romance. In fact, many of the relationships feel under-served – poor Neil doesn’t get much to do besides dance the robot and bed a procession of randy pensioners – and it’s a shame because the chemistry of the leads is top notch. A mid-movie falling out between Simon and Jay confirms that these four louts are at their best together, even if their stubborn loyalties could be standing in the way of an ideal love life. For all its talk of sex, The Inbetweeners admirably refuses to measure the cost of friendship with such libidinous currency – though these boys may find celibacy stifling and unbearable, deep down they know that loneliness is even worse.

Email ThisBlogThis!Share to TwitterShare to FacebookShare to Pinterest
Labels: reviews, The Inbetweeners