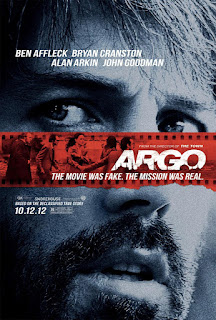 Argo, Ben Affleck’s political thriller about the daring real-life rescue of six American diplomats from Iran at the height of the 1979 Tehran Hostage Crisis, is the type of film that Academy members should be lining up to vote for.  While there’s no singularly spectacular component, every element of Argo is dialed in just right, from its zippy pacing to its quotable script to its painstaking re-creations of 1970s coiffure.  No one portion overwhelms the others in a perfect example of the crisp, competent, crowd-pleasing moviemaking that appears like the product of a halcyon studio system that not only pays tribute to that era, but also makes it seem globally vital both then and now.


The film starts with a bang as a small band of Americans – including two married couples – escape the Tehran embassy when it is attacked by Iranian revolutionaries and take refuge at the Canadian ambassador's house.  Those who weren’t quick or lucky enough to flee were famously held for 444 days as the United States government tried in vain to end the standoff.  But after learning of the lucky stowaways, CIA exfiltration expert Tony Mendez (Affleck) concocts a potential solution when he stumbles across Battle for the Planet of the Apes while channel-surfing: disguise the targets as a Canadian film crew scouting locations for a desert-set space opera.  Even fake movies need good publicity, so Mendez enlists famed make-up artist John Chambers (John Goodman) and semi-retired producer Lester Siegel (a wickedly funny Alan Arkin) to help sell the illusion.  Along the way, the trio battles the skepticism of the film industry, the CIA, and even the people Mendez goes to Iran to rescue in pulling off their hair-raising scheme.

From the intensity of the captivity scenes to the freewheeling satire of the Hollywood interlude, Argo’s plot aims to hit every point on the emotional spectrum, so give Affleck credit for placing each narrative puzzle piece in its perfect context.  He has an invisible style that emphasizes collaboration and eschews fireworks; Affleck’s greatest talent is knowing when to let his talented teammates, such as editor William Goldenberg and composer Alexandre Desplat, step in and create meaning.  Argo also benefits from Affleck and screenwriter Chris Terrio’s ability to suggest parallels between mounting a complex covert operation and making a big-budget motion picture.  The Hollywood jibes are spot-on, and their tendency to use recognizable faces like Bryan Cranston and Kyle Chandler in minuscule roles as government officials is almost an in-joke itself.  It’s also a testament to the group of character actors – especially Clea DuVall, Scoot McNairy, and Christopher Denham (Sound of My Voice), among others – who pay tribute to the escapees by prioritizing a convincing group dynamic over individual grandstanding.

There is a sense that Affleck molds Argo to fit his own arc from fallen movie star to acclaimed director, arranging and embellishing the facts of Mendez’s caper to maximize the number of nail-biting sequences and opportunities for personal redemption.  Still, he encourages a general atmosphere of restraint by putting so many irons into the fire.  Between his CIA support team, his movie-biz cohort, and the Iranian authorities who are hot on the trail of the incognito Americans, Affleck's frowny-faced performance blends nicely with the film's focus on how the trust forged between individuals can inspire heroic gestures.  A straight-ahead espionage caper with the guts to push its star and mastermind into the background for the sake of dramatic tension, Argo is a fitting testament to teamwork both in its style and its execution.
Posted by Eric Ambler at 10:08 PM