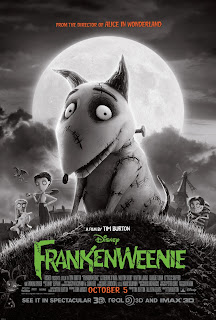 It’s safe to say that Tim Burton is one of the world’s most successful style as substance filmmakers, even if his films have increasingly displayed a frustrating tendency to emphasize design for its own sake.  However, Burton returns with a renewed focus on storytelling in Frankenweenie, a black and white homage to classic monster movies that doubles as Burton’s homage to his younger self.  Utilizing stop motion puppetry to expand and update his 1984 live-action short – which imagined a young Dr. Frankenstein as the distraught owner of a recently deceased bull terrier – Burton crafts the type of energetic, playfully macabre film that first launched him to stardom.

In the hamlet of New Holland, Victor (voiced by Charlie Tahan) is a shy introvert who labors on elaborate home movies, interested only in the companionship of his beloved dog, Sparky.  His struggle to make friends isn’t the terrible tragedy that it usually is in children’s movies.  “He’s just in his own world,” asserts his mother (Catherine O’Hara) – a Burton rallying cry if there ever was one.  However, Victor’s idyll is interrupted when Sparky’s is suddenly struck by a car.  He’s devastated until the day his science teacher, Mr. Rzykruski (Martin Landau), uses electricity to stimulate the dead tissue of a frog.  Armed with this inspiration, Victor brings his pet back to life but quickly finds that his miraculous discoveries are difficult to keep secret from his peers – especially the ones eager to exploit the secrets of re-animation for their selfish gain.

The characters’ attempts to play God have some monstrous consequences, but Frankenweenie is unabashedly pro-science.  Though the style and iconography is borrowed from Universal’s quintessential Frankenstein films, there’s just as much inspiration from Mary Shelley’s novel regarding the responsibility that comes with radical, world-altering knowledge.  Burton is most explicit about this in a subplot involving Mr. Rzykruski (played with a spry sense of humor by Landau) confronting the close-minded parents of his newly-inspired pupils.  Rzykruski’s intellectualism is misinterpreted as cold and uncaring elitism, at least until Victor saves the town via his monster-related expertise and rational approach to problem solving.  The movie also has a cute dog in it.  Frankenweenie couldn’t possibly do better than that in its attempts to humanize science.

That said, Burton’s process still seems somewhat calculated.  There’s the repetition of familiar Burtonesque elements – the melancholy outcast, the emaciated sleekness, Winona Ryder – and his goth-y subversion of suburban domestic tranquility doesn’t feel as fresh as the second (or third, or fourth) time around.  But overall, Frankieweenie works better than Burton’s recent efforts to return silliness to his sensibility.  Despite its frequent nods to classic horror tropes, Frankenweenie has an intrinsic warmth that allows those without a thorough appreciation of Burton’s morbid interests to fully enjoy its boy-and-his-corpse-dog story.
Posted by Eric Ambler at 9:37 AM