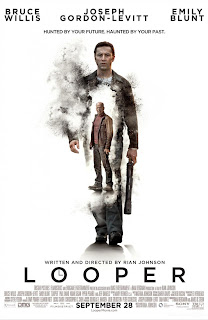 There are a lot of moving parts to Looper, a stylish sci-fi thriller that has just enough juice to keep the whole marvelous machine running.  In the late 21st century, time travel is invented and immediately outlawed.  It’s also nearly impossible to dispose of a body, so criminal syndicates illicitly send their victims 30 years into the past, where specialized assassins called “loopers” are waiting to execute them.  When the mob no longer requires a looper’s services, they end his contract with a big payday and a final deadly rendezvous with his future self.  Should a looper get second thoughts and fail to "close the loop," the powers that be will cut it off at both ends.

Despite its gruesome consequences, it’s an attractive (and lucrative) career in the dystopian United States of 2044, where bands of vagrants roam the streets and ten percent of the population exhibits a genetic mutation that gives them extremely weak telekinetic powers.  “A bunch of assholes think they’re blowing your mind floating quarters,” grumbles Joe (Joseph Gordon-Levitt), the film’s protagonist and the narrator of this expository avalanche.  He’s employed as a looper by Abe (Jeff Daniels), a mob boss sent from the future to supervise organized crime in Kansas.  Joe begins to notice that his organization is closing an unusually high number of loops.  His suspicions are confirmed when his best friend (Paul Dano) learns that 30 years in the future, a shadowy figure called “the Rainmaker” is methodically exterminating all known loopers.  It's an ominous piece of news that triggers Joe’s split-second hesitation upon meeting his own future self (Bruce Willis) and allows his older counterpart to escape his reckoning.

At this point, it would be easy to assume that Looper starts folding in on itself like Inception-inspired origami.  However, writer-director Rian Johnson attempts to sidestep scrutiny by quickly shifting his focus from the mechanics of time travel (which largely remain a mystery) to its consequences.  It’s remarkable how the film becomes more exciting once Joe trades gunplay for gumshoeing and flees the city for the sanctuary of a farm owned by a hardscrabble single mother (Emily Blunt).  In the grand scheme of things, Johnson isn’t subverting expectations so much as he is delaying gratification.  But it’s a gambit that works perfectly as he tightens the screws with tense, well-written exchanges, like a discussion between Joe and his older self that questions whether reading the spoilers of one’s life will inspire a different approach.

Looper is surprisingly nimble for a heady, genre-bending neo-noir that combines time travel, telekinesis, and levitating motorbikes.  That’s because it is only ostensibly about the big, complex questions raised by its technological paradoxes; strip away its high-concept trappings and you have a character-driven drama defined more by its performances than its visual panache.  Gordon-Levitt convincingly projects a hard-boiled persona thanks to impressive makeup and prosthetics that not only help him better resemble Willis, but also disguise his kewpie features.  Daniels is also fantastic as a put-upon middle manager and the film’s wink to the audience, a man from the future who mocks Joe’s fondness for neckties as one of his employees’ many “20th century affectations.”

As a metaphor for a mash-up artist like Johnson, that’s almost too perfect.  It’s entirely fair to view Looper as an amalgam of cool ideas inspired by other sci-fi head trips like Twelve Monkeys, which starred Willis in a similar past-altering role, and Primer, whose creator, Shane Carruth, consulted with Johnson on Looper's time travel elements.  They’re mostly good ideas, too (constructing Willis' character as a hybrid homage to his roles in both Monkeys and Die Hard is a rare misfire) and executed with a fan’s zeal for the unexpected.  That this execution may not amount to more than tossing everything into the air at once – echoed in some of the film’s most impressive special effects shots – isn’t the point.  It’s the edge-of-your-seat anxiety of watching Johnson and his cast perform their juggling act, knowing that the slightest slip-up will spoil the extraordinary spectacle.  Rest assured, Looper doesn’t drop the ball.