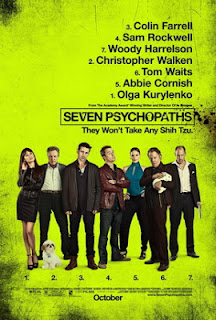 While the well of Quentin Tarantino imitators hasn’t exactly run dry – even twenty-plus years after his filmmaking debut – it has been diluted with ideas and imagery borrowed from the next generation of convention-bending riffsters like Wes Anderson, Michel Gondry, and Charlie Kaufman.  (It’s also been a decade since Adaptation, in case you were wondering.)  Meta is the new non-linear, a style that’s been practically codified via repetition in movies with agendas as diverse as Synecdoche, New York and 21 Jump Street.  Continuing that pedigree is Seven Psychopaths, a self-reflexive black comedy from writer-director Martin McDonagh (In Bruges), where the main punchline is that its script is being written before your very eyes.  Marty (Colin Farrell) is a screenwriter struggling to develop a Tarantino-esque script about seven sundry nutcases who come together to do…something.  Marty’s best friend, a 40-ish unemployed actor named Billy (Sam Rockwell), tries to motivate him by placing an ad for psychopaths in the weekly alternative paper.  Billy’s also a part-time scammer, kidnapping dogs with the help of his associate, oddball retiree Hans (Christopher Walken), then returning them to their owners for a hefty reward.  When Billy and Hans take the beloved Shih Tzu of a violently unstable gangster (Woody Harrelson), Marty gets drawn into a caper that gives him more “inspiration” than he bargained for.

After a carnage-filled first half that feels a little too bloated and forced, Seven Psychopaths eventually hunkers down into a crackerjack second act that smartly focuses on its core trio.  They abscond with their canine contraband to a desert campground hideout, where they each have a chance to pitch the ideal movie version of their experience – Billy’s is a raucous bloodbath, Hans’ is an affecting philosophical fable, and Marty’s is a thoughtful thriller where the characters renounce killing and “just sit around talking.”  The real movie is all three of those rolled into one, capitalizing on McDonagh’s gift for fierce dialogue and darkly satiric characterization.  Between Rockwell’s jittery enthusiasm and Walken’s calm resignation, you get the sense that violence is less of a threat and more like an everyday annoyance for these weirdos.

McDonagh, with his years of experience as an acclaimed playwright – and an Oscar for his 2005 short film Six Shooter – is certainly no mere copycat.  Seven Psychopaths works as a uniquely creative metaphor for facing one’s own artistic inadequacies.  However, it also feels like several separate movies stitched together in a cartoonish approximation of trendy indie self-awareness.  McDonagh goes to a lot of trouble setting up his various chess pieces in the film’s twist-heavy first half, then hastily abandons them.  The filmmaker’s ambition gets the better of him as the number of subplots begins to rival the body count.  Despite promising more than it can deliver, Seven Psychopaths still boasts a handful of funny, finely-staged sequences that attest to McDonagh’s talent and vision.  Though it never quite gels into something more than the sum of its parts, I’ll always take the movie that has the confidence and courage to overreach over the one that cravenly sells itself short.
Posted by Eric Ambler at 10:34 PM