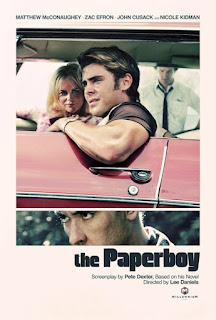 The Paperboy, writer-director Lee Daniels’ follow-up to Precious, peddles in a similar type of fantasy grotesquerie as his unlikely Sundance sensation.  It’s a difficult line to walk – despite the stellar performances of Mo’Nique and Gabourey Sidibe, the stabs at dark humor torpedoed any sense of propriety in the 2009 urban-misery drama.  The Paperboy at least has the advantage of being based on a sensational Pete Dexter novel about a group of intrepid journalists trying to prove the innocence of an incarcerated backwoods man in 1960s Florida.  It’s a much better foundation for Daniels’ signature brand of discursive pulpiness, a swampy morass of loose morals and primal lust that is, in theory, more resistant to the director’s strained attempts to emphasize larger social concerns.

Daniels assembles an impressive cast featuring Zac Efron as Jack James, the titular delivery boy and the aimless son of a small-town newspaperman (Scott Glenn).  Adventure comes calling when his older brother Ward (Matthew McConaughey), a hotshot Miami journalist, returns home with his prickly writing partner (Red Tails’ David Oyelowo) on a mission to prove that convicted murderer Hillary Van Wetter (John Cusack) was falsely accused of his crime – a victim of “redneck justice.”  Getting Van Wetter to talk, however, requires the assistance of Charlotte Blass (Nicole Kidman), a middle-aged sexpot who has maintained a lengthy and explicit correspondence with the inmate and is naively convinced of both his innocence and his suitability as a husband.

A film grossly lacking in subtlety, The Paperboy is fortunate that its cast is up to the challenge of wringing some nuance out of a sweaty Southern soap opera.  Kidman brings an aching vulnerability to her role as a sentient sex doll who oozes unbridled erotic energy.  (Her mere presence causes Van Wetter to van wet his prison trousers in what’s probably only the third or fourth most uncomfortable scene in the film.)  But McConaughey steals the movie with his warm, empathetic performance and guides the reveal of his character’s own hidden desires to a level above the film’s messy pileup of increasingly lurid twists.

As comfortable and daring as Daniels is with his actors, he is still in the dark when it comes to almost anything else.  His stylistic wind-ups – an assault of gauzy dream sequences, overwrought narration (delivered in Macy Gray’s sassy rasp), and a constantly shifting tone – are present and as irritating as ever.  Such an approach ensures that The Paperboy never comes particularly close to delivering a cogent narrative.  Daniels is torn between pursuing a multilayered examination of sin and temptation, and embracing the story’s parodic elements, like Cusack’s glaringly obvious, pants-hating sociopath.  Unfortunately, too much of the latter is featured as the film surges ahead with po-faced conviction until its thematic threads of race, sex, and truth are frayed beyond repair.  Credit Daniels and his cast for creating the movie’s appropriately feverish atmosphere.  But for all the heat radiating from the screen, the end result is ironically half-baked.
Posted by Eric Ambler at 7:25 PM

Email ThisBlogThis!Share to TwitterShare to FacebookShare to Pinterest
Labels: reviews, The Paperboy