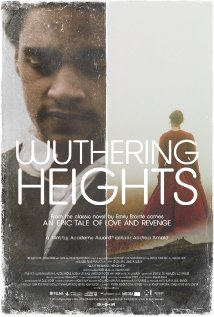 The degree of difficulty in adapting classic literature for the screen is often underrated.  Though the source material provides a strong starting point, its prestige can ascribe an immaculate quality to stories that are far messier than we recall.  That’s what British auteur Andrea Arnold attempts to avoid with Wuthering Heights, a new adaptation that captures the chilliness of Emily Brontë’s novel about the unexpected arrival of a dark-skinned orphan to a farm on the Yorkshire moors.  The foundling’s new family christens him Heathcliff, and he quickly develops a mutual fixation with Catherine Earnshaw, his benefactor’s rebellious daughter.  But instead of replicating the book’s omniscient tack throughout the flowering and dissolution of their relationship, Arnold tells the story entirely from Heathcliff’s point of view, embellishing a tortuous romance with a commentary on identity and otherness.

Arnold places her thematic intentions front and center with her decision to have black actors portray Heathcliff – a liberal interpretation of the character’s “gypsy” complexion as described by Brontë.  It gives Arnold and co-writer Olivia Hetreed license to add a racial dimension to the Heathcliff’s lifelong rivalry with jealous de-facto brother Hindley (Lee Shaw).  However, the stormy romance is still at the center of Arnold’s interpretation, paralleling her depiction of life on the moors as something both harsh and sublime.  It’s a sentiment encapsulated by Catherine (Kaya Scodelario) scolding a prodigal Heathcliff (James Howson) after he disappears from Wuthering Heights for several years – “Why would you ever want to leave this?” she asks, as the howling wind almost blows the two actors off of a rocky outcropping.  Any irony in that statement is offset by Catherine’s sincere devotion both to her home and her true love, though Heathcliff’s low social standing and his painful self-awareness of his outsider status make it difficult for him to reciprocate in an appropriate fashion.

Following the lead of William Wyler’s classic 1939 film adaptation, Arnold excises the novel’s second generation of characters – the progeny of Catherine and Heathcliff’s troubled marriages to other suitors – to focus on the admittedly stronger “star-crossed lovers” arc.  That leaves the film with plenty of time for the wonderful Shannon Beer and Solomon Glave, who play the younger versions of Catherine and Heathcliff as they go about the crucial process of solidifying their emotional and psychological bonds.  (In one strangely affecting sequence, she literally licks his wounds after a brutal beating.)  As an adaptation, Wuthering Heights is not necessarily concerned with illuminating Brontë’s refined prose.  The film’s take-it-or-leave-it combination of blunt imagery and elliptical storytelling starts to feel stiff once Scodelario and Howson enter the picture.  Yet Arnold still finds moments of beauty as her camera glides freely through the grass and mud, and she brings a refreshingly crude aesthetic sensibility to a genre that’s often too enamored with delicacy.  Wuthering Heights is tragedy and romance with a strong emphasis on the former, a barbaric yawp of a film that allows its powerful images and raging emotions to resonate in places where words simply cannot.
Posted by Eric Ambler at 9:30 PM