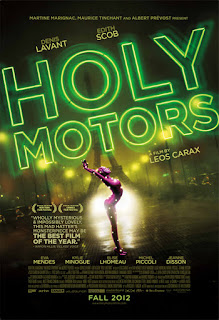 In Martin Scorsese’s family-friendly adventure Hugo, the early silent filmmaker Georges Méliès asks an adorable moppet if he’s ever wondered where his dreams come from.  He might as well be asking the audience.  The idea of cinema as dream factory is nearly as old as cinema itself, which is helpful to keep in mind when approaching Holy Motors, a puzzling provocation from another French mastermind, Leos Carax.  The film follows Mr. Oscar (Denis Levant) as he treks across Paris to act out nine bizarre scenarios at the behest of his mysterious employer.  As he rides along in a white stretch limousine that doubles as a dressing room, Oscar dutifully applies the makeup and prosthetics that transform him into an old female beggar; or a feral, ravenous leprechaun; or whatever character the job demands. These are not just dreams, but everything else in the kitchen sink of the subconscious, all brought to life with the go-for-broke gusto of a grand showman and the maddening obfuscation of a serious artist.  It’s the weirdest and possibly the most wonderful thing I’ve seen all year.

Even though Oscar displays a sense of resignation about his duties – something he discusses throughout the day with his chauffeur, Céline (Édith Scob) – the film pulses with possibility.  Each of his assignments attest to the formulas embedded in even the most experimental of stories.  Over the course his workday, Oscar stars in a motion-captured fantasy epic, a gritty crime drama, and a musical tragedy (co-starring Kylie Minogue!), among others.  Levant is phenomenal in the trickiest of roles, skillfully slipping into various personae while maintaining an empathetic version of the weary workingman that exists behind the disguises.  Because the “stories” he creates are not necessarily captivating in and of themselves – some of these gigs seem like mercy, but others are just mean-spirited or alienating – it’s these glimpses of the journeyman Oscar that resonate.  Is he an actor or an angel?  Or is he something else entirely?

Holy Motors is a wild trip through the headspace of a creative professional trying to find absolute truth – if such a thing exists – in the business of make-believe.  It’s also a mind-bending commentary on the messy collision of digital technology and practical artistry in the modern film industry.  Carax laments the loss of visible machinery; he clearly misses the flicker of the projector bulb and, somewhat surprisingly, the inviolability of the fourth wall.  It’s as if he feels powerless against the public demand for a fluid reality, and a day with Oscar is like getting at peek at the absurd lengths that filmmakers must go to preserve that illusion.  Holy Motors almost goes out of his way to defy comprehension.  Trying to read between its lines is like staring for too long at an abstract painting.  But by turning cinema on its ear and fooling around with everything that comes tumbling out, Carax creates something truly unforgettable – a lucid dream of a film that’s more than likely to inspire some dreams (or nightmares) of its very own.
Posted by Eric Ambler at 7:11 PM