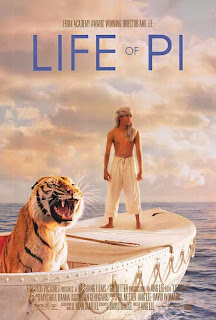 Despite the production and marketing challenges of supposedly “unfilmable” books, they are all the rage in Hollywood, from the narrative Rubik’s Cube that is Cloud Atlas to the ‘how-do-you-dare-film-this?’ adolescent violence of The Hunger Games.  The trend continues with the visually breathtaking Life of Pi, based on the Yann Martel bestseller about a shipwrecked Indian teen who survives for months on the open ocean in a lifeboat with a hungry Bengal tiger.  The obvious difficulty here isn’t the subject matter – a quirky coming-of-age story that morphs into a gripping survival tale – but the necessity of creating animal actors that can hit precise cues and perform dangerous stunts.  It almost goes without saying that the visual effects in Pi steal the show, and are all the more impressive for their seamless integration of computer-generated images with flesh-and-blood actors.  (“The next Avatar!” screams the promotional copy.)

Oddly enough, it’s the early portion of the story concerning the childhood of Piscine “Pi” Patel that poses the greatest challenge to a successful cinematic interpretation of Martel’s heavily philosophical novel.  As the spiritually inquisitive younger son of the family that owns the municipal zoo in Pondicherry, India, Pi’s upbringing resembles something like a multicultural Venn diagram: an Indian kid with a French name dabbling in Hinduism, Christianity, and Islam before his rationalist father scolds him for blindly accepting others’ truths.  Pi’s pre-pubescent soul-searching is an especially writerly flourish, one that does not register as strongly on the screen as it does on the page.  Toss in the framing device of an adult Pi (Irfan Khan) recounting his life story to an author (Rafe Spall) in a quiet Montreal neighborhood, and it’s difficult to imagine that this is the film setting a new benchmark for 3D cinematic spectacle.

But Life of Pi gets much better once it drops its spiritual pretensions and gets down to the business of survival.  The touchy-feely nature of the prologue quickly becomes disconnected from the rest of the film once the family sets out for a new life in North America on a cargo ship carrying their entire menagerie.  A violent storm unexpectedly sinks the vessel, stranding Pi (played as a teenager by newcomer Suraj Sharma) on a lifeboat with Richard Parker, an adult tiger whose territorial instincts make it especially challenging for the boy to utilize the lifeboat’s supplies and seek rescue.  It’s a bracing, savage interlude that belies the story’s gentle beginnings.

Though director Ang Lee is best known for character-driven prestige dramas, anyone familiar with his wire-fu epic Crouching Tiger, Hidden Dragon also knows he’s no stranger to pushing the visual envelope.  And there are many jaw-dropping images in Life of Pi, including a sea full of phosphorescent fish and an island oasis teeming with thousands of meerkats.  All that digital whiz-bang is doubly necessary given the novel’s knotty narrative conclusion, which threatens to alienate audiences expecting a technically-impressive crowd pleaser in the vein of Cast Away.  Ultimately, Life of Pi’s boldest statement isn't in its revolutionary visuals and captivating sense of wonder, but in its message about how we prefer stories that use symbolism to make our existential dread easier to swallow.  Pessimists will complain that this technically makes the entire film one big cop out based on bogus pan-religious principles.  They might be partially correct, but you don’t have to buy into Pi’s philosophy to appreciate its rare combination of intelligence and top-notch spectacle.
Posted by Eric Ambler at 9:49 PM

Email ThisBlogThis!Share to TwitterShare to FacebookShare to Pinterest
Labels: Life of Pi, reviews