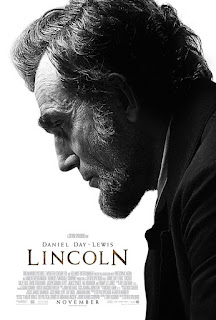 Abraham Lincoln is, to Hollywood at least, a Great American Mascot – a metaphor for the aspirational ideals of an entire nation.  The difficulty of retelling the Lincoln story is not in locating a new angle but the challenge of mining nuggets of intimacy from the bedrock of legend.  The opening scene of Steven Spielberg’s Lincoln illustrates this well, as two star-struck Union soldiers breathlessly recite the Gettysburg Address back to the man who wrote it.  President Lincoln (Daniel Day-Lewis) looks on politely as they struggle to recall the ending, until an African-American soldier purposefully and dramatically completes it for them.  That’s Lincoln in a nutshell:  a film that struggles to balance its obligations as a crowd-pleasing biopic of arguably the most popular and iconic president in American history and its Lincoln-like ambition to break an impossibly complex and politically loaded scenario down to its basic human elements.

So how does a film divided against itself stand?  Pretty well, as it turns out.  After its shaky introduction, Lincoln improves markedly as it goes along.  Spielberg’s wisest decision is to narrow the scope of the film to a single month in Lincoln’s life.  In January 1865, the president is working to secure passage of the 13th Amendment outlawing slavery in the United States.  Meanwhile, Confederate representatives are on their way to the capitol to discuss a negotiated end to the Civil War – a goal many are eager to accomplish with or without the abolition of slavery.  It’s a situation that’s perfect for spelling out Lincoln’s political genius, portrayed by Day-Lewis as an unassailable sangfroid withstanding a never-ending assault of competing agendas.  The two-time Oscar winner’s turn as the Great Emancipator is an intriguing variation of his trademark Method intensity, calmer and quieter but no less committed.

It’s a shame, then, that Lincoln is content to allow a cloud of inscrutability to partially obscure Day-Lewis’ nuanced performance.  The film doubles down on the president’s trademark homespun anecdotes, lending him a sphinx-like quality.  Perhaps in concession to the difficulty of making an epic about a figure famous for plainspoken brevity, Lincoln is dominated by its strong bench of colorful supporting characters.  There’s the pragmatic Secretary of State William Seward (David Strathairn) and the volcanic Secretary of War Edwin Stanton (Bruce McGill), trusted advisors with opposite approaches to preserving the Union; the abolitionist battleaxe Thaddeus Stevens – played with a crusty brilliance by Tommy Lee Jones – who controls a crucial Republican faction in Congress; and Mary Todd Lincoln (Sally Field), a tempest of migraine headaches and melancholic fits.  This immensely qualified cast does justice to the florid, vividly theatrical dialogue of the script penned by playwright Tony Kushner (Angels in America).

Ultimately, Lincoln is more of a historical epic and a love letter to American politics than a straight-up biopic.  Spielberg attempts to portray Lincoln as both saint and schemer, a family man and political operator whose well-intentioned ideas were only accomplished through a great deal of compromise and lawyerly machinations.  But, perhaps sensing how far he might stray from his successfully sentimental formula, Spielberg falls back into boisterous crowd-pleasing mode with haloed monologues from Day-Lewis and Jones, as well as a surprising abundance of humor (mostly concerning a trio of proto-lobbyists played by James Spader, John Hawkes, and Tim Blake Nelson).  Though it takes a while to find its balance, Lincoln is a worthwhile addition to the presidential filmography, not a revolutionary vision of the meaning of Abraham Lincoln but an evolutionary step towards separating the man from the myth.
Posted by Eric Ambler at 4:36 PM