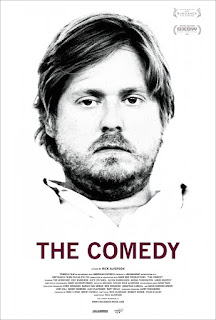 There’s a British colloquialism I like, “taking the piss,” which refers to a type of unreasonable antagonism that’s usually intended to provoke an emotional reaction.  The Comedy is basically a 90-minute workshop on this concept, an acerbic character study starring Tim Heidecker (TV’s Tim and Eric Awesome Show, Great Job) as Swanson, an aimless scion of a privileged family whose patriarch is slowly dying in a New York City hospital bed.  Swanson passes his time by attempting to transgress as many social boundaries as possible.  Along with his like-minded buddies – including Awesome Show cohort Eric Wareheim and LCD Soundsystem frontman James Murphy – he pursues a deadpan agenda of expressing unpleasant emotions like shock, confusion, and grief by provoking them in others.  He’s a certifiable asshole to the world at large, mocking its sincerity and making ludicrous demands.  But it’s clear that every minute of his alcohol-soaked existence that his actions are clothed in an immense inner pain.

The loose, shambling plot concerns the attempts of Swanson’s sister-in-law (Liza Kate) to force him to recognize the gravity of the situation.  Documents are waved in his face, but money doesn’t seem to be an issue.  Swanson has plenty of resources for his roaming freak-outs – with or without his merry pranksters – and is perfectly content to conduct his life as irreverent performance art, trying his best to make others uncomfortable by impersonating gardeners or musing about the untapped potential of eugenics.  Even at his most offensive, though, Swanson has an odd charm about him.  Or rather, a remarkable chutzpah.  Moxie of Swanson’s caliber – on display when he goes to a bar in an black neighborhood to “represent” – is a rare gift, even if it comes with its share of harmful side effects.

The same could be said of the film itself.  Writer-director Rick Alverson and co-writers Robert Donne and Colm O’Leary have the right idea to ride the line with Swanson’s stormy moods with humor so dark it tilts toward the absurd.  Heidecker is more than up to the task as an unlikely but talented leading man, drawing on the sinister undercurrents of his previous work in alternative comedy (see: Tim and Eric’s Billion Dollar Movie).  Casting the moon-faced comedy provocateur also helps Alverson cultivate the ambiguity he desires.  When Swanson finally lands a job as a dishwasher (he obsession with obtaining employment is the movie’s most unexpected leitmotif), it’s hard to tell how much of his persona is a put-on.  Is he sincerely seeking an additional distraction from his emotions?  Or is it just another way to transfer his misery onto others?

Never an easy film to watch, The Comedy doesn’t deign to answer such questions explicitly.  Nor, thankfully, does it wish to traffic in obvious labels.  The “h” word looms over Swanson and his Williamsburg-dwelling, PBR-swilling clique, but even within this group there’s a difference between the harmless eccentrics and their frustrated friend play-acting his way through complex, painful emotions.  Once you strip away the protective layers of irony, The Comedy stands as a surprisingly moral film despite its apparent sympathy for the devil.  It’s an impressively-acted cautionary tale that balances its puerile outrageousness with the crushing knowledge that when it comes to jokes with cruel punchlines, none are crueler than life itself.
Posted by Eric Ambler at 5:13 PM

Email ThisBlogThis!Share to TwitterShare to FacebookShare to Pinterest
Labels: reviews, The Comedy