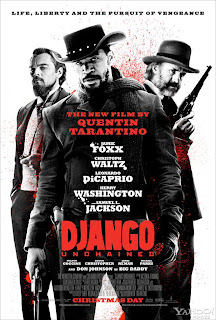 Three years after crafting the ultimate revenge fantasia in the bloody revisionist masterpiece Inglourious Basterds, Quentin Tarantino tops himself with Django Unchained, a spaghetti western that finds the freed slave Django (Jamie Foxx) wandering the antebellum South alongside German bounty hunter King Schultz (Christoph Waltz) in search of his wife, Broomhilda (Kerry Washington).  And while there was no shakier proposition than a bawdy response to the stolid traditions and victimhood of Holocaust dramas, Django immediately feels like a film that’s right in Tarantino’s wheelhouse.  The western genre already has a long history of violent, outré films made by maverick auteurs (a legacy that Django freely references, beginning with naming its protagonist after the archetypical hero of countless spaghetti westerns) and the director has made a career out of examining how codes of justice clash within lawless systems.  Still, it’s exhilarating to see how easily Tarantino knocks it out of the park while using one of the ugliest eras in American history as a sandbox for his brand of kinetic postmodern filmmaking.

Perhaps that’s simply the mark of a master storyteller, as Django Unchained is truly the stuff of legend.  The film makes its case as a brilliant inversion of the Old South’s chivalrous self-mythologizing, featuring an abolitionist outsider mentoring a black hero as he develops the skill and courage to rescue his damsel in distress.  Django’s quest is further juxtaposed with the odious prejudices and shameful cruelties of southern slaveholding society, witnessed in full force at the plantation of sadistic planter Calvin Candie (Leonardo DiCaprio, at his finest).  His estate – ironically dubbed “Candyland” – is infiltrated by Django and Schultz when they discover that Broomhilda is a captive there, leading to a shootout that recalls Scarface as much as Sergio Leone.  But there’s no doubt that Django earns its bloodshed.  Tarantino’s script builds up to it masterfully and contains about as many verbal confrontations as physical ones – the former courtesy of Waltz, once again displaying his gift for delivering the famously verbose filmmaker’s magnificent dialogue.

Django Unchained is a testament to the artfulness tucked away inside forbidden pleasures: the thinking person’s exploitation film.  It suggests that Tarantino, the ultimate fanboy, has continued his maturation into a thoughtful and discriminating professional.  Without losing the shit-kicking verve and obsession with repurposing cultural junk that made him famous, he uses the catharsis of fiction in Django to illuminate a bleak historical fact and amortize the emotions that weren’t fully captured in the written record.  This also allows the film to portray extreme racism and misogyny as part of its historical context, but that’s more of an observation than a criticism.  As Django comes to realize, revenge itself is the dirtiest business of all – a complex, encompassing hatred directed at the morality-deficient, regardless of color (which includes Samuel L. Jackson as Candie’s callous head house slave).  As it turns out, Django Unchained is both the most moral film Tarantino has ever made and the most American movie of 2012, a two-fisted tour de force that revels in its destruction and creation of recklessly bold, blustery myths.
Posted by Eric Ambler at 2:08 PM