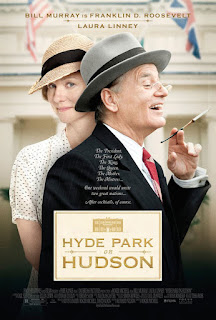 Karl Marx once said that history repeats itself first as tragedy, then as farce.  He wasn’t speaking specifically about Hyde Park on Hudson, but he’d probably come to the same conclusion about a film that traces the origins of a strategic alliance between Great Britain and the United States back to a wooly weekend of extramarital shenanigans and the most controversial hot dog of all time.  It’s 1939, and as Europe sits on the brink of war, King George VI (Samuel West) and Queen Elizabeth (Olivia Colman) – Elizabeth II’s parents – are the first sitting British monarchs to visit the United States.  The culmination of their tour is an all-important trip to Hyde Park, New York, the hometown of President Franklin D. Roosevelt (Bill Murray), where the royals attempt to curry diplomatic favor with the American head of state.  Watching all this unfold is Margaret Suckley (Laura Linney), a distant cousin of FDR summoned to Hyde Park to “lift his spirits” as he toils away on delicate matters of statecraft.  She is quickly taken by the president’s charms and they begin an affair, despite the presence of their highborn guests and Roosevelt’s wife, Eleanor (Olivia Williams).

Their sexual peccadilloes are just one of the many cultural and personal differences presented by director Roger Michell (Notting Hill) as potentially disastrous for the health of Anglo-American relations.  While the film aims to demystify its noble subjects, it mostly traffics in frivolity with comedy that’s staunchly middlebrow and disappointingly broad.  That’s especially true when it comes to Colman’s Elizabeth, a strident, shrewish caricature who’s constantly whining about the Roosevelts’ hidden agenda in forcing her husband to eat undignified logs of ground meat.  “It doesn’t mean anything!  It’s just a hot dog!” bellows the king, but you could have fooled me with the way the film fixates on the offending wieners.

Michell and writer Richard Nelson’s obviously overwhelming affection for FDR saves Hyde Park on Hudson from feeling completely formless.  But even that is a double-edged sword.  Margaret, the film’s narrator and ostensible protagonist, is hurt when she learns of the president’s many concurrent affairs, yet every betrayal somehow turns her into an even bigger apologist.  It’s not a good look for Linney, who does the best she can with her underwritten character.  Meanwhile, Murray’s generically genial spin on FDR is fine but slightly puzzling, like a grandfather enthusiastically dressing up for Halloween.  (In the gallery of Murray’s larks, this one belongs closer to Garfield than to Zombieland.)

Hyde Park on Hudson undoubtedly suffers most from poor timing.  Even though he gives arguably the film’s best performance, West is left holding the bag as the guy following Colin Firth’s inspirational Oscar-winning turn as George VI in The King’s Speech.  Also, the decision to tell the story from the perspective of Margaret, a minor character who remains tangential to the film’s main themes, echoes last year’s My Week with Marilyn.  Combining those two oh-so-tasteful reference points results only in a flat concoction that would much rather appear refined than be considered interesting.  In other words, it could have used more hot dogs.

This review was originally posted to Screen Invasion.
Posted by Eric Ambler at 9:41 AM