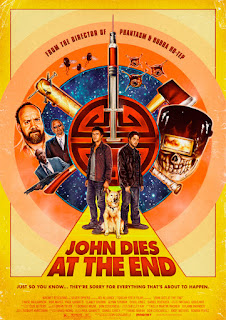 The sharpest criticism I can give John Dies at the End, a new horror-comedy from cult favorite Don Coscarelli (Bubba Ho-Tep, the Phantasm series), is also, I suspect, the greatest compliment - it’s spectacularly disorganized.  Chaotic in the best possible way, the occult buddy flick is a raucously weird trip through a wonderfully askew universe reminiscent of Buckaroo Banzai that constantly has the audience guessing where it’ll go next.  And much like Banzai, it revolves around a Caucasian hero with a curiously Asian name:  David Wong (Chase Williamson), a twentysomething Everyman whose glib buddy John (Rob Mayes) goads him into trying a new mind-expanding drug called “Soy Sauce,” unaware that it’s known to suddenly bestow precognitive abilities on certain users.  Soon after receiving his new psychic awareness, David is reluctantly drawn into defending our world from an invasion by the hellish beings of an alternate dimension.

That doesn’t even begin to scratch the surface of the movie’s nuttiness, all stemming from a non-linear construction that also includes a frame story of David telling his tale to a skeptical journalist (Paul Giamatti, who also produced) and glimpses of John and David’s future as low-rent monster hunters.  (The title is just another way of cheekily flouting convention and is assuredly not a spoiler, though the fact of John’s existence remains a moving target.)  Apart from the easy chemistry between Williamson and Mayes, John sketches a deep and inscrutable mythology through supporting turns from cultishly-adored actors such as Doug Jones, Glynn Turman, and Clancy Brown.  Everybody but David, a classic audience surrogate, seems to have privileged information about what’s going on, especially Brown, a celebrity magician who literally vanquishes monsters over the phone.  But the farther afield it gets, the more fun is found in simply sitting back and watching the mayhem unfold.

Some might see the story's tricky structure - from the eponymous novel by the “real” David Wong that weaves a demonic folklore throughout its drop-ins on the two heroes’ lives - as an encumbrance.  While it’s possible to lose the thread of the film’s time-skipping narrative, credit is due to Coscarelli for infusing it with his typical anything-goes enthusiasm and devising imaginative ways to depict the book’s woolly, off-kilter style in appropriately cinematic ways, including a brief animated interlude.  It is plainly obvious from the tacky CGI and nondescript locations that Coscarelli doesn’t quite have the budget he needs to give the film a full polish, something he knows all too well as an independent film lifer, though it should be noted that the movie's physical creature creations are still top-notch.  However, I doubt that it will matter to genre fans who will happily trade glossy production value for a unique directorial vision applied to a ripping yarn.  In many ways, John Dies at the End is representative of the Coscarelli filmmaking philosophy, a quirky delight pitched directly to moviegoers that don't mind setting out without a roadmap or even a destination, so long as they are surprised and delighted by the journey.
Posted by Eric Ambler at 7:53 AM

Email ThisBlogThis!Share to TwitterShare to FacebookShare to Pinterest
Labels: John Dies at the End, reviews