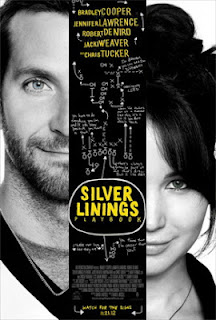 Movies about mental illness tend to take liberties with their protagonists’ conditions in order to keep their likability intact.  Pat Solitano (Bradley Cooper), the hero of Silver Linings Playbook, may benefit a little from this treatment, but it’s clear early on that his journey will not be a mawkish one.  A former schoolteacher diagnosed with bipolar disorder, Pat’s just been released from the Baltimore mental hospital where he was sent after brutally beating a fellow teacher he caught in flagrante with his wife.  Believing he can manage his condition without drugs, he vows to lead a life of positivity and productivity – “Excelsior” is his new motto – that will reunite him with ex-wife Nikki (Brea Bee), who has filed a restraining order against Pat in the wake of his violent episode.

He doesn’t get very far.  Within a couple days, he’s tossing a copy of Farewell to Arms out the window and waking up his parents to complain about the book’s downer ending.  In fact, Pat almost immediately rejects anything that offends his worldview, including the attractive young widow Tiffany (Jennifer Lawrence) he meets at a friend’s dinner party.  She’s battling her own depression in the wake her husband’s death, which has sent her into a spiral of despondent rudeness and sex addiction.  When Tiffany propositions Pat, he insists that he’s still married but takes her on a date anyway.  Of course, it ends in a barrage of mutual insults as Pat struggles to prevent his growing feelings for Tiffany from triggering the worst symptoms of his condition.

It is not your average romance, but Silver Linings Playbook is not your average romantic comedy.  While writer-director David O. Russell (The Fighter), adapting from Michael Quick’s serio-comic novel, is only willing to go so dark in a movie with obvious Oscar aspirations, he finds a winning humor in the flammable chemistry of his leads.  Sassy and sharp, dirty and vulnerable, Lawrence gives as good as she gets from Cooper, who makes a statement against his typecasting as a smug alpha-male by thoroughly deconstructing it via his emotionally-arrested, lovesick mook.  Even as they bicker and bait each other, it’s undeniable that having someone that can relate to their mental condition is helping them both get well.

The film shifts into a more conventional gear once Tiffany strikes a deal with Pat to pass messages to his estranged spouse in exchange for partnering with her in a dance competition.  Russell keeps the psychological conflict in the foreground via Pat’s father, Pat Sr. (Robert De Niro), a superstitious Philadelphia Eagles fan who believes that his son has a major influence on his team’s all-important “juju.”  In one fell swoop, the film not only suggests that the Solitanos’ neuroses are generational, but also that other compulsions, despite beings socially acceptable, are no less destructive.  (The film’s cultural milieu – the self-loathing cauldron of Philadelphia sports fandom – makes it easy for Russell to drive this point home.)

Silver Linings Playbook requires the viewer to forgive a lot of behavior that’s questionable at best, with the valleys of Pat’s condition positioned for maximum dramatic effect (though nobody’s going to mistake this movie for a documentary).  However, the film is democratic in distributing its characters’ hang-ups –Pat’s mom (Jacki Weaver) is a pro at sublimating her anxiety into homemade snacks – and puts them to good use in a satisfying climax that ties together all of the romantic and psychological stakes.  As difficult as it can be for the enigmatic coupling of Silver Linings Playbook to acknowledge and accept their vulnerabilities, theirs is not necessarily a story of redemption – it’s about finding some measure of satisfaction once you realize it’s impossible to stop being yourself.
Posted by Eric Ambler at 9:20 PM