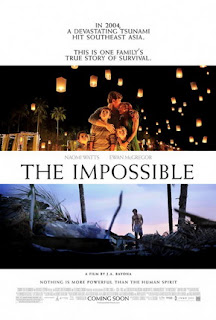 The overwhelming natural forces that separate a family are no match for the emotional forces that keep their hopes of reconciliation alive in The Impossible, a harrowing survival tale based on the true story of a beleaguered Spanish family during the devastating 2004 earthquake and tsunami in Southeast Asia.  Henry Bennett (Ewan McGregor) and wife Maria (Naomi Watts) decamp to a beachfront resort in Thailand with their three boys for a brief Christmas holiday, far away from the stress of Henry’s high-powered corporate job in Japan.  On December 26, a massive wave smashes into the coast and washes Maria and eldest son Lucas (Tom Holland) miles inland.  Meanwhile, Henry helps the two younger children, Thomas (Samuel Joslin) and Simon (Oaklee Pendergast), survive the onslaught at the resort, then starts a frantic search for his missing loved ones.

While the basic structure of The Impossible is meant to keep audiences primed for its big tear-jerking moments, director J. A. Bayona (The Orphanage) cleverly paces the film so that each emotional crescendo feels fully earned.  The entire first half is a visceral rollercoaster, employing impressive special effects to depict the uncanny terror of an ocean suddenly appearing where it should not be.  Maria emerges from the ordeal alive but grievously injured, and at first seems capable of consoling Lucas and leading him to safety.  But the dynamic shifts as her injuries worsen, and we see the transference of strength from mother to son.

Holland is especially good at the heavy lifting once Watts’ character becomes bedridden and sporadically communicative, and is able to convey equal parts fear and fortitude when his post-disaster mission to help others find their missing family members inadvertently launches him into a new phase of survival mode.  Even when the focus shifts to Henry’s somewhat tedious search for the rest of his family, Bayona keeps tossing gentle curveballs to fight any complacency developing alongside expectations for a big, emotional reunion.  It also helps that Bayona and his crew shoot the film with a refreshing dynamism, turning what could be contrived moments of uplift and heartache into truly thrilling drama.  Still, Bayona can’t resist including some twinkly touches, such as when Geraldine Chaplin briefly drops in to gaze at the stars with the film’s two adorable moppets.

The Impossible is all about the nitty-gritty, though, especially in the medical sense (consider this a warning to the squeamish - compound fractures ain't pretty).  Montages are kept to a minimum and it’s well-acted throughout, with special attention paid to realistic interactions between strangers during the most trying of times.  While some people are empathetic – like the man who risks draining his cell phone battery when McGregor struggles to speak to his out-of-country relatives without breaking down – others are prickly or soberly honest about the limits of their assistance.  And while Bayona avoids sensational melodrama, he doesn’t shy away from the grim realities confronting the families that aren’t as lucky.  That makes the strength of the Bennetts’ familial bonds especially affecting in this poignant, patient film assuring us that, somewhere in the tempest, there’s still a sliver of sunlight.

This review was originally posted to Screen Invasion.
Posted by Eric Ambler at 5:04 PM

Email ThisBlogThis!Share to TwitterShare to FacebookShare to Pinterest
Labels: reviews, The Impossible