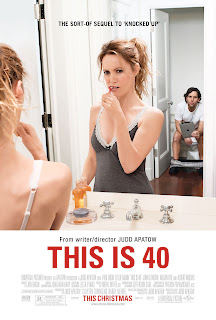 The axiom about absence making the heart grow fonder is put to the test in This Is 40, comedy impresario Judd Apatow’s “sort-of sequel” to his 2007 film Knocked Up, which introduced audiences to married couple Pete (Paul Rudd) and Debbie (Leslie Mann), the counterweight to that film’s schlubbly protagonist lurching his way toward fatherhood.  These characters were refreshingly blunt about how sometimes the most difficult part of being a parent isn’t necessarily raising your child, but tolerating the person you chose to mate with.  They were funny, but in somewhat stereotypical ways that you didn’t mind in small doses – Debbie the joyless nag and Pete the lackadaisical galoot.  Who, then, wouldn’t want to see these two sarcastic, potty-mouthed meanies in their own adventure about discovering the sobering realities of middle age?

You have to admire Apatow’s bravery in refusing to sugarcoat the pain and insecurities that he alchemizes into raunchy, crowd-pleasing humor.  However, This Is 40 takes this mission too seriously, an extended sequestration with a rude, self-absorbed couple and their long-suffering children, Sadie and Charlotte (played by the director’s real-life daughters, Maude and Iris Apatow).  Pete and Debbie’s anxieties about hitting the big 4-0 are compounded by professional setbacks and familial drama.  Pete’s independent record label is struggling financially, but that doesn’t stop him from lending money to his lazy, emotionally manipulative father (a hilarious Albert Brooks).  Meanwhile, Debbie tries to reconnect with her estranged father (John Lithgow), while she suspects a young, flighty employee (Megan Fox) of stealing inventory from her clothing boutique.


That’s a lot of baggage to bring to a movie that’s already as crowded as an airport carousel.  Pete and Debbie are linked by their mutual dark streak; when they click, so does the movie, such as during a brief resort getaway that’s enhanced by a marijuana cookie (few actors play stoned for laughs as well as Rudd).   But their imperfections, meant to make them seem relatable and human, just become grating over two-plus hours of needless stalling on big decisions and necessary confrontations.  The pacing can be politely described as “convenient.”  Pete and Debbie’s birthdays are apparently only a week apart, but it seems like several months elapse while familiar faces from Apatow’s stable of writers and performers – Jason Segel, Annie Mumolo, Chris O’Dowd, Lena Dunham – float in and out of the story, dispensing profane and playful one-liners.

The meandering vibe of the project suggests Apatow attempting to make another of his patented “hangout” movies, but the problem is that you probably wouldn’t want to spend an afternoon with its protagonists.  This Is 40 gives you a front row seat to Pete and Debbie’s marital discord, an uncomfortable slog that completely overshadows most of the film’s bright spots.  In fact, the only subplot of note – featuring Melissa McCarthy as a righteously angry parent of one of Sadie’s classmates – points out the movie’s major flaw.  Calling the pair a “bank commercial couple,” she nails the incongruity of Paul and Debbie’s whiny, off-putting angst and their obvious attractiveness and affluence.  Rich, beautiful people can have problems too, but Apatow fails to realize that adding half-baked melodrama and a cloying indie rock soundtrack doesn’t make them more sympathetic.
Posted by Eric Ambler at 8:49 PM

Email ThisBlogThis!Share to TwitterShare to FacebookShare to Pinterest
Labels: reviews, This Is 40