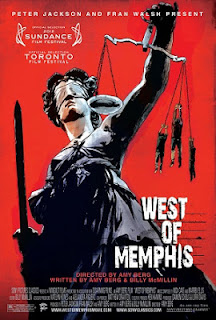 The case of the “West Memphis Three” is well-trodground.  Not only was it exhaustivelyexamined by Joe Berlinger and Bruce Sinofsky in their Paradise Now trilogy, but it’s also the subject of a newdocumentary, West of Memphis,directed by Amy Berg (Deliver Us From Evil) and co-produced by Hollywood mogul Peter Jackson.  But unlike Berlinger and Sinofsky’slongitudinal study – which encompasses three separate films that aired on HBOover the past 15 years – West of Memphisis a testament to the influence that outside parties have had over theevolution of the case from local miscarriage of justice to international causecélèbre attracting the attention of advocates like like Pearl Jam frontmanEddie Vedder, punk icon Henry Rollins, and Jackson and his spouse, FranWalsh.

West ofMemphis begins with a necessary rehashing of the facts.  Sometime on a spring evening in 1993, threeeight-year-old boys were murdered in the Robin Hood Hills area of West Memphis,Arkansas.  Their naked bodies were foundsubmerged in a drainage ditch, their hands and feet bound with their ownshoelaces.  Claiming that the bodies alsoshowed signs of sexual mutilation, the authorities quickly and somewhatbafflingly came to the conclusion that the murders were part of a satanicritual.  Three local teenagers – DamienEchols, Jessie Misskelley, and Jason Baldwin – were convicted of the crime andsentenced to life in prison, save Echols, who was sentenced to death for hisalleged role as “mastermind” and leader of a secret devil-worshipping cabal.

The police’s jump to Satanism as motive resemblesa twisted version of that Sherlock Holmes axiom: When you have eliminated theimpossible, whatever remains, however improbable, must be the truth.  Except, argues Berg, when you fail to exhaustall probable explanations.  West of Memphis doesn’t dwell so much onwhy these three particular people were railroaded beyond being poor outcasts inthe middle of the Bible Belt with dark tastes in music and fiction.  Instead, it focuses on mistakes made in thecriminal investigation and the state’s willful ignorance of evidence thatpoints to a different perpetrator – Terry Moore, the stepfather of one of themurdered boys.  Though he was neverformally considered a suspect by the state, the filmmakers dig up manyacquaintances who attest to past instances of Moore’s violent and abusivebehavior.

Besides strongly suggesting Moore’s guilt, thefilm also includes well-researched refutations of the evidence used to convictthe Three; for example, a trip to a turtle farm shows how the supposedlysatanic mutilations were likely caused by animals scavenging the bodiespost-mortem.  If there’s a weak link,it’s in the emphasis on the case as a slow-burning cultural phenomenon.  Berg and Jackson completely miss the irony ofaccused “cult leader” Echols using his considerable charisma to attract celebrityattention to his cause, his letters from prison read at benefit rallies by thelikes of Vedder and Johnny Depp.  Thoughthe film’s main agenda is exoneration, it’s also about the lionization ofEchols (who nabs a co-producer credit), which seems inappropriate given the minimalinformation presented about the othertwo men who have also languished behind bars for over 18 years.  Still, Westof Memphis is a rousing call-to-arms that convincingly presents its doubtsabout the case without wringing its hands about the efficacy of the entirejustice system, so long as there are people willing to fight for what is right.

This review was originally posted to Screen Invasion.
Posted by Eric Ambler at 11:01 PM

Email ThisBlogThis!Share to TwitterShare to FacebookShare to Pinterest
Labels: reviews, West of Memphis