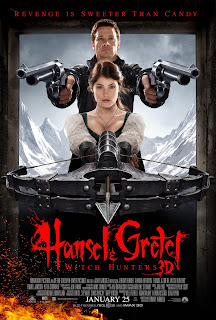 Jeremy Renner’s recent blitzkrieg through some of Hollywood’s biggest action franchises from Mission Impossible to The Avengers to The Bourne Legacy may have raised his Q rating but hasn't, shall we say, engaged the actor’s complete range.  So it’s legitimately exciting when he’s finally given the chance to loosen things up in the action-comedy Hansel & Gretel: Witch Hunters as the grown-up avatar of the Grimm Brothers’ Hansel who, along with his sister Gretel (Gemma Arterton), wanders a quasi-medieval countryside as a supernatural bounty hunter.  But for a premise that offers up plenty of juicy opportunities to subvert fairy-tale and fantasy tropes (especially with the leeway provided by its R rating) Hansel & Gretel doesn’t distinguish itself beyond the same predictable story twists and repetitive action beats of most high concept blockbusters.  Norweigan writer-director Tommy Wirkola tries to introduce a few clever wrinkles to his English language debut, but in the end he and Renner share the same predicament: whatever interesting nuances they bring to the table can't disguise the thoroughly humdrum movie surrounding them.

After a brief prologue that dutifully re-establishes the known facts (woods, candy house, witch trapped in oven), Hansel & Gretel transitions into the “story after the story,” with an impressive animated sequence that details the siblings' exploits as news articles from various Gothic broadsides.  It sets a faintly comic tone that’s kept afloat mostly by a sarcastic Renner and the impressionable fanboy Ben (Thomas Mann), a teenager living in a town plagued by witches who are kidnapping children in preparation for a dark ritual.  Hansel and Gretel are hired by the mayor to investigate the crimes, much to the chagrin of the town’s cruel sheriff (Peter Stormare, in a disappointingly limited role).  But he’s never taken seriously as a threat, especially not when the grand witch Muriel (Famke Janssen) shows up with her powerful coven, blasting holes in the terrified humans' thatched storybook roofs.  The casting of the beautiful Janssen is a bit of a puzzle considering that she rarely appears out of her ugly-witch makeup; her character serves mainly to pop up and menace the heroes in measured intervals, not unlike a villain in a theme park ride.

Wirkola, who first attracted attention with the Nazi zombie romp Dead Snow, at least attempts to shake up the film’s somnambulant been-there, done-that vibe with that old attention-grabbing standby: gratuitous violence.  This is a movie that doesn’t skimp on the gore, lending it a bloody patina that’s closer to the macabre spirit of the original Grimm Brothers stories.  Indeed, the makeup, stunts, and anachronistic weapons of Hansel & Gretel are a fine showcase for Paramount's trade departments.  But tradecraft alone can't redeem the film’s narrative oversights.  Wirkola scatters goofy subplots like breadcrumbs (the best being Hansel’s struggle with diabetes after his excessive childhood sugar intake), but they exist more for convenience than for color.  Failing any interesting details, the story is a string of revelations - about the witches’ evil plan, about Hansel and Gretel’s parentage, about Hansel’s obligatory love interest (Pihla Viitala) - that hurriedly accumulate in one big pile of fantasy clichés.  The entire production just feels rushed - the film lasts barely 80 minutes - and lacks the kind of breathing room that would clarify just how seriously it takes itself and make it a funny movie, rather than a merely silly one.
Posted by Eric Ambler at 10:03 PM