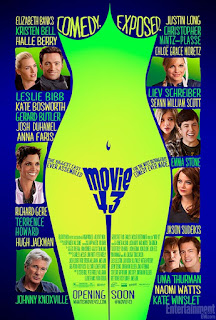 Movie 43 is nothing less than an affable desecration of the entire legacy of sketch comedy - from SNL to Kentucky Fried Movie to Monty Python to your Saturday afternoon improv class - and a grand act of self-sabotage from a tasteless titan of ‘90s gross-out comedy.  Peter Farrelly (reminding us that the salad days of There’s Something About Mary were a long, long time ago) assembles a star-studded cast in a series of vignettes loosely joined by a frame story of a desperate screenwriter (Dennis Quaid) pitching his ludicrous ideas to a studio exec (Greg Kinnear).  This is where things already start to go wrong, as it disingenuously suggests that the content of Movie 43 is simply in the imagination of a fictionalized Hollywood hack.  However, these are indeed the ideas of actual Hollywood hacks who somehow convinced big-name actors to sacrifice themselves at the altar of grade-school level poop jokes.  The layers of badness here are more than a bit Kafkaesque.

Reviewing a film like Movie 43 presents a unique challenge: how do you describe scenes that no one in their right mind would find appealing?  Should I talk about the large pair of testicles dangling from Hugh Jackman’s neck that his date, Kate Winslet, cannot get him to acknowledge?  Perhaps you’d like to know about Chris Pratt’s thoughtful consumption of cheap burritos and strong laxatives in preparation for a tryst with his coprophiliac fiancé (Anna Faris)?  It’s a fool’s errand, mostly because determining which of the sketches is the worst is like arguing about which Pope was the most Catholic.  Still, my dishonorable mention goes to the story of a teenage girl (Chloë Grace Moretz) whose first period causes hysterical panic in a room full of men, a scenario that oddly ends up affirming the misogynistic viewpoint it attempts to skewer.  The fact that the segment was directed by a woman - Elizabeth Banks, who also appears in a D.O.A. story about an evil animated cat - makes it even more mind-boggling.

In fact, the entire movie displays an off-putting nastiness wherever women are concerned - they are shat on, beaten up, and objectified as nude, life-size MP3 players (don’t ask).  It makes a skit about a blind date that devolves into a ruthless game of truth or dare seem progressive; at least each of its participants, Halle Berry and Stephen Merchant, are equally humiliated.  Farrelly and his cronies can’t help but apply some polish to their collective turd whenever they move away from straight-up scatological humor, such as a sketch where two parents (Liev Schreiber and Naomi Watts) explain that giving their home-schooled son an “authentic high school experience” includes subjecting him to bullying and awkward romantic encounters.  But it’s all too little, too late.  It’s telling that Movie 43 literally gives up right before its final segment, an act of audience-insulting defiance that would double as an admission of guilt for wasting the efforts of hundreds of industry professionals, had the film possessed even the tiniest shred of shame.
Posted by Eric Ambler at 7:38 PM